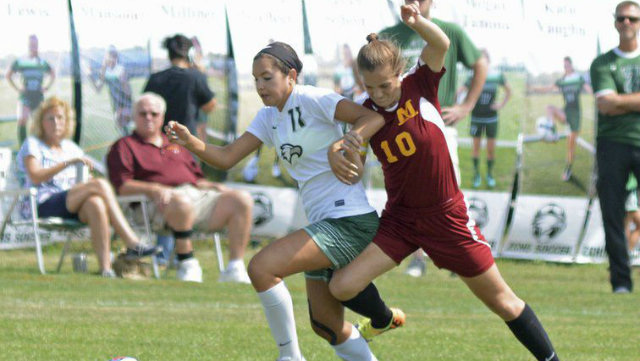 The Lady Eagle Invitational has grown into a showcase for top teams in the Ohio-Kentucky-Indiana region, and this year the two-day, 20-team mixer features seven SIMA FAB 50 teams. Contests are played at Zionsville Youth Soccer Association's facility.

FOLLOW ALONG: TopDrawerSoccer will have Twitter @TDS_HS_Soccer updates from the fields starting with Friday afternoon’s contests. Also, check out @LadyEagleInvite for updates, as well.

Here is a glance at the top teams:

There is no surprise to Penn’s hot start at 6-0. The team is averaging six goals a match and has yet to allow a single goal. … Florida State commit Kristina Lynch has 12 goals and four assists. … Notre Dame commit Brooke VanDyck has five goals and six assists. … Junior Maya Lacognato, who had a strong showing in Zionsville last year, has six goals and three assists. Northwestern commit GK Mackenzie Wood has played in all six shutouts, but hs been able to share time with two other keepers.

Last year’s Indiana state runner-up is 4-0-1 and has allowed only one goal this season. The team is led by Arizona commit Hallie Pearson, who has four goals and five assists. She missed the team’s draw due to U.S. U18 National Team commitments. … Senior GK Reni Osuntokun has four shutouts. … Junior F/MF Briana Arthur, who is committed to Saint Louis, had four goals and one assist. … Senior F Kayla Fitts had a goal and four assists. … Senior D Jordan Smith has a goal and one assist.

Noblesville opened with a scoreless draw with Brebeuf Jesuit, and has yet to concede a goal.

The Pandas have opened up strong to snag the early No. 1 ranking in the state. NDA has wins over state-ranked Simon Kenton and former nationally ranked Mason (Ohio). Toledo commit Maddie Wilhoite has three goals and one assist from a defensive role. … Marian commit Maya Decker has a team-high five goals and three assists. … Ashland commit Allison Robertson has two goals and three assists. … Senior keeper Ellie Hellman has six shutouts. … Seniors Kylie Long and Libby Durrough are committed to Spring Hill.

Sacred Heart, a former Top 25 team, fell from the rankings with an early loss to West Jessamine. However, now at 4-1, this remains a dangerous team that made a major splash at last year’s event. … Louisville commit Cassie Amshoff leads the team with six goals. … Ashley Durik has four goals and three assists.

HSE is 5-1-1 after coming off a strong summer showing at the adidas National Showcase in Strongsville, Ohio. … Hamilton Southeastern is in a run of 11 straight matches against state-ranked teams from Indiana and Ohio, and the loss is to Carmel. … Top players are senior Saanika Kamat, who is returning after a injury-riddled junior season, juniors Ava Keaffaber, Claire Wilkinson and GK Chloe Banning. … Freshman Izzie Wallace has three goals and seven assists.

Like Sacred Heart, an early loss for Assumption bumped this team out of the SIMA FAB 50. Still, it should not be overlooked in this tournament field. … Assumption is 4-1-2 and played to a scoreless draw with Simon Kenton. … Riley Ennenbach leads the team with eight goals.

The host team is 3-2-1. … Top players include seniors Emma Bisch and Ellie Clifford and junior forward Katie Vaughn, who has four goals.

A section runner-up last season, Cathedral is 3-3 to start 2017, but all three losses have been to Indiana state-ranked teams.