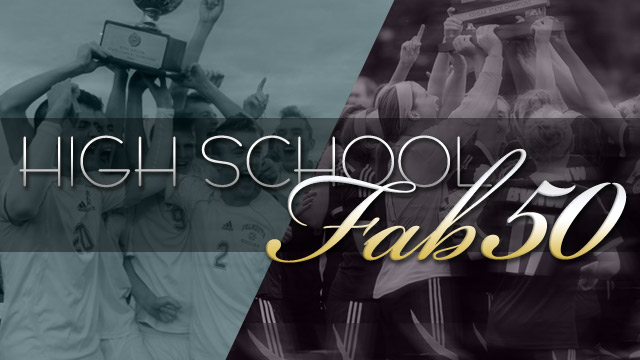 Two of the nation's longest undefeated streaks ended last week, and it both cases, it marked the end of national title runs.

In Nebraska, Kearney (Neb.) boys lost for the first time since 2017, bouncing the team from No. 2 to out of the FAB 50 -- for now. In Michigan, Marian (Mich.) saw its 58-match undefeated run ended on a game was that rescheduled to an indoor facility so it could get played in an otherwise rainy day. Marian's loss ended its brief stay at FAB 50 No. 1, although the team remains in the FAB 50.

Those two results started what could be described as a bit of a market correction in this week's FAB 50s.

There are only six new teams in this week's girls FAB 50, and no debut higher than No. 43, still just about every team from 1-43 changed ranking order. On the boys side, there are seven new teams, and the highest debut also is at No. 43. But there was plenty of jockeying between Nos. 2 and 43.

Kearney, a highly ranked preseason team, fell all the way out of the FAB 50 with its untimely loss to six-loss Papillion-La Vista (Neb.). But as the active states get deeper into postseason play, currently ranked teams -- especially a number of them between 26 and 50 -- are one loss away from being bounced, as well. This will start to create FAB 50 openings in upcoming weeks, and Kearney is likely to return to the FAB 50 by season's end.

The run for No. 1 in spring boys is now very clear. If Dalton wins this week's Georgia 6A title, this perennial power will finish atop the rankings. If Dalton falters, Jenks (Okla.), which capped a perfect season with a state title win on Saturday, will move from No. 2 to No. 1.

On the girls side, there could be plenty of movement yet. Novi (Mich.), a two-time FAB 50 champ, moves into the No. 1 spot this week. But a pair of Illinois teams and Southeast powers from Georgia and Virginia round out the Top 5 -- and all are still in action.

BIG MOVERS: BOYS: Lakeside School (Seattle, Wash.). After finishing behind Roosevelt in the league race, Lakeside won a district playoff game to move this undefeted team from No. 28 to No. 17 this week. Lakeside and Roosevelt both advance to the 3A state tournament. ... GIRLS: T.C. Williams (Alexandria, Va.). The slew of upsets last week allowed T.C. Williams to vault from No. 31 to No. 14 this week as the team carries a perfect mark into the final week of regular season play.