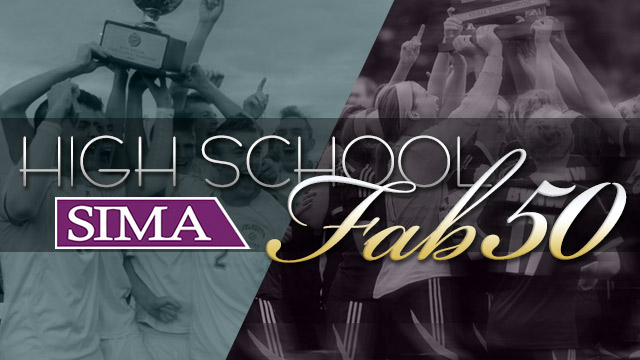 However, that didn't derail the Redskins from their goal of perfection.

For the second straight year, this highly talented program delivered an undefeated season and a SIMA FAB 50 No. 1 ranking, following the team's 4-1 win over Owasso (Okla.) in the Class 6A state final. Led by Youth National Team performer Parker Goins and at least half a dozen NCAA Division I-bound players, Tulsa Union went 19-0 to run its win streak to 36 matches. Tulsa Union is 51-1 over the past three years. Goins scored twice in the final and added an assist. All four goals came from underclassmen who have committed to Division I programs.

The past two years, Tulsa Union has worked its way to No. 1 after other teams lost. If all the impact underclassmen return next year, the Redskins certainly have a case for a preseason No. 1 ranking.

BIG MOVERS -- BOYS: Parkview (Lilburn, Ga.). Parkview edged SIMA FAB 50-ranked Milton (Ga.) in the state final after outings forer No. 1 Chattahoochee (Alpharetta, Ga.) in the semifinals to jump from No. 41 to No. 20 this week. GIRLS: James Madison (Vienna, Va.). Madison jumped from No. 45 to No. 17 this week after knicking off former No. 2 and two-time defending state champion Battlefield (Haymarket, Va.). Madison now has wins of the No. 2- and 3-ranked teams in Virginia.