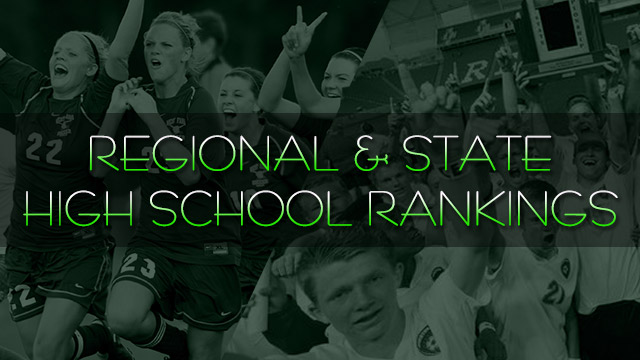 A new No. 1 in Georgia high school girls soccer today will mean a new SIMA FAB 50 Spring No. 1 on Tuesday.

Harrison (Kennesaw, Ga.) had its win streak halted at 39 matches in a playoff loss to Grayson (Loganville, Ga.). Interestingly, Harrison and Grayson, which met for last year's state title, were the preseason No. 1 and 2 teams in Georgia and both started the season ranked in the SIMA FAB 50 Top 5. Harrison had spent the entire season at No. 1 in the SIMA FAB 50, a run that will end Tuesday.

The only new state No. 1s for spring boys soccer came when the Nos. 1 and 2 spots swapped places in Alabama and Washington. Oak Mountain (Birmingham, Ala.) regained the top spot in Alabama after beating former No. 1 Bob Jones (Madison, Ala.) en route to a state title. Tahoma (Covington, Wash.) overtook Camas (Camas, Wash.) after Camas tied a match last week.