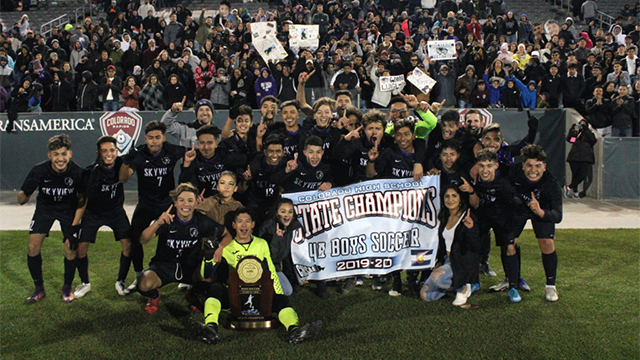 It's nearing crunch time as high school state associations — after dutifully awaiting state and CDC return-to-play guidelines — need to make decisions as it pertains to fall high school sports in the wake of the COVID-19 pandemic.

In the latest moves, Colorado has moved its fall boys season to March 1-May 1 of 2021 while Minnesota has decided to continue the fall season as scheduled.

So far, the national return-to-high-school-play response has been as varied as the start dates to the season.

In an attempt to stay abreast of who's doing what, TopDrawerSoccer is compiling this list of traditional fall-playing states (and now some winter states) that have made concrete plans as it pertains to the upcoming season.

UTAH: The high school girls season started regular-season play on Aug. 4. The boys season is a spring sport in Utah.

INDIANA: As of July 29, Indiana was planning to start the fall season on time. READ MORE

KANSAS: Kansas City high schools have decided not to play fall sports, but the Kansas High School Activities Association voted down a delay to the sports season on Tuesday, July 28, meaning the boys soccer season will move forward with an Aug. 17 practice start date. (Girls soccer is a spring sport in Kansas.) The boys season will start Aug. 28, but the regular season schedule was reduced from 16 to 14 matches. READ MORE (Aug. 12, 2020)

MISSOURI: As of July 22, the Missouri High School Activities Association announced it will have high school sports as planned for the fall, which includes boys soccer. However, like Maryland, the state association is leaving the decision to the local jurisdictions. READ MORE (Updated July 22, 2020)

MONTANA: As of July 25, high school athletics in Montana was expected to proceed as planned. READ MORE (Updated July 25, 2020)

TENNESSEE: In the last minute (July 28), the governor overturned a previous decision of girls soccer being grouped with football and allowed for the high school season to proceed as planned -- which means practiced started July 29 with matches slated for Aug. 17. (Updated July 29, 2020)

CONNECTICUT: The CIAC announced a delay to the fall season, which now has a Sept. 24 start date for regular season contests. READ MORE (Updated July 31, 2020)

KENTUCKY: Kentucky Board of Control voted Tuesday (July 28) to move forward with fall sports practice starting Aug. 24, which is a slight delay to the season. READ MORE (Updated July 28, 2020)

MAINE: The Maine Principals Association has delayed the start of preseason practice for fall sports from Aug. 17 to Sept. 8. More recently, the number of regular season matches have been reduced from 14 to 10. READ MORE (Updated July 31, 2020)

MICHIGAN: Michigan has delayed the start of competition, a decision that was reached July 29. Boys soccer is played in the fall in Michigan. READ MORE (Updated July 29, 2020)

NEW HAMPSHIRE: New Hampshire has pushed back the start of practice to Sept. 8 with matches expected to commence Sept. 18. READ MORE (Aug. 6, 2020)

NEW JERSEY: As of July 10, New Jersey announced a delayed start to the fall season, with soccer beginning its first official playdate as Oct. 1, almost a month later than usual. Some sections already have canceled the fall season. READ MORE (Updated July 10, 2020)

NEW YORK: New York has multiple governing bodies, but one thing is clear the best-case scenario is a late start to the fall season. The issue will be revisited in the upcoming weeks. As of July 29, the NYSPHAA — the state's largest high school sports governing body — canceled fall sports state tournaments. (Updated July 29, 2020)

OHIO: On July 28, Ohio announced that scrimmages for contact sports (including boys and girls soccer) are suspended until further notice. There is no clarity on what this means for the start of the regular season. READ MORE (Updated July 29, 2020)

PENNSYLVANIA: As of July 31, the PIAA has allowed for delayed starts to the regular season. The WPIAL (the Pittsburgh-area schools) took advantage of that announcement to delay the start of regular-season matches until Sept. 14. READ MORE (Updated Aug. 1, 2020)

VERMONT: The Vermont Principals Association announced it was delaying the start of fall practice to the first day of return-to-school, which is projected as late August or early September. If that stands, it will be about a two- or three-week delay to the season. READ MORE (Updated July 2, 2020)

VIRGINIA: The VHSL has addressed spring sports, in which boys and girls soccer is contested. The modified spring season will start no earlier than April 26, which is two weeks later than originally planned. READ MORE (Updated July 27, 2020)

WEST VIRGINIA: West Virginia has delayed the start of preseason practice by two weeks. At this point, West Virginia schools are expecting to start practice Aug. 17.

WISCONSIN: Wisconsin has pushed the start date for boys soccer back to Sept. 7, but there is an option for schools to move the boys season to the spring, which would be alongside the girls season. READ MORE

CANCELED FOR THE FALL/POSTPONED TO AFTER NEW YEAR

CALIFORNIA: California is the first among the winter-playing states to officially delay its winter start. The CIF announced that the winter soccer season, which usually runs December-March, now is targeting a May 29, 2021, finish for section playoffs and June 5, 2021, finish for the regional titles following a later start to the season. DETAILS (Updated July 20, 2020)

COLORADO: Colorado has opted to move the fall boys soccer season to a March 1-May 1 season in the spring of 2021. Girls soccer is a spring sport in Colorado. READ MORE (Updated Aug. 4, 2020)

DELAWARE: Delaware has pushed the fall sports season to a February practice start and games to comence on March 12 for a six-week season. READ MORE (Updated Aug. 6, 2020)

ILLINOIS: Illinois has moved boys soccer from the fall to a February start, with the season running Feb. 15-May 1. The girls season remains in the state's spring session, which has been pushed to May 3 to June 26. READ MORE (Updated July 29, 2020)

MARYLAND/D.C.: The MPSSAA has postponed the fall and the start of the winter seasons until after the New Year. Girls soccer started as a spring sport in Maryland in Montgomery County, but the rest of the state adopted fall girls soccer. In the decades since, Montgomery County moved to fall girls soccer to come inline with the rest of the state, but now it was among the first in Maryland to push its fall boys and girls soccer to the spring of 2021. Now, the state has postponed athletics until school returns to in-class instruction, which will not happen until Jan. 29, at the earliest. (Updated Aug. 3, 2020)

NEVADA: Nevada has moved boys and girls soccer to the spring of 2021. There will be no state tournament and the regular season will be shorted to little more than a month (March 5-April 10). READ MORE (Updated July 23, 2020)

OREGON: After first delaying the start to the end of September, Oregon's high school association decided on Aug. 5 to postpone boys and girls soccer to the spring season. The season now is expected to run in March and April. READ MORE (Updated Aug. 5, 2020)

WASHINGTON: The WIAA announced on July 21 that the traditional fall girls and boys 1B/2B seasons will move to the spring, alongside the traditional boys soccer season. READ MORE (Updated July 21, 2020)

If you are aware of any additional updates, please email sheldon@TopDrawerSoccer.com.