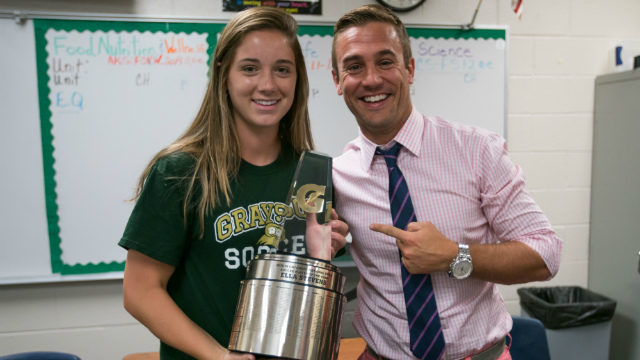 Ahead of the 2016 season, the Grayson High School girls soccer team needed to find another goal scorer.

Talented forward Jennifer Westerndorf’s early graduation to Notre Dame left a void up front to the tune of 40 goals.

One season, 25 goals later, the 2016 graduate and incoming Duke recruit’s ability to adapt her game led to her earning the Gatorade Girls National Player of the Year award.

“This year I felt the need to step up and be a goal scorer and game-changer instead of sitting back and playing balls in,” Stevens told TopDrawerSoccer over the phone. “My game changed, and I think it made me better."

Winning the Player of the Year became a goal of Stevens after YNT teammate Mallory Pugh earned the distinction in 2015. Former U.S. men’s national team forward and ESPN analyst Taylor Twellman surprised Stevens in front of the Grayson boys and girls soccer teams on Thursday morning with the trophy.

“The word that everyone uses is selfless, both on the field and off the field,” Twellman said about Stevens. “When an athlete is getting recruited in their sophomore year of high school, then you know something’s right.”

A creative and versatile attacking player, Stevens has excelled on the field for Grayson, ECNL club powerhouse GSA and also as a member of various U.S. youth national team dating. She helped the U20 WNT qualify for the World Cup in December down in Honduras, and will begin her college career at Duke in the fall.

Stevens, the No. 11 ranked player in the IMG Academy Top 150, committed to the ACC power back in January 2014. She’s expected to compete for minutes when she arrives in August.

“The one thing that pulled us towards her was she is so good on the ball,” Blue Devils head coach Robbie Church told TopDrawerSoccer. “She’s such a creative player, and our program loves to bring in those types of players. She’s one of those players when they get the ball you kind of sit up a little bit, and you’re like ‘what’s going to happen now, what’s she doing to do with this.’ She can beat people off the dribble, strike a ball from distance, she serves a very good ball. She’s going to be a very dynamic player, a very exciting player for people to watch.”

Stevens wrapped up her high school career this spring, posting gaudy numbers for Grayson even without Westerndorf. Notching 25 goals and 11 assists, she led the Rams to the second round of the Class AAAAAA state tournament.

Prior to 2016, Stevens served primarily as the creative spark in the Grayson midfield. With Westerndorf supplying the finishing, Stevens notched 48 goals and 72 assists her first three years of high school ball.

“Jen is an amazing goal scorer and it made my job a whole lot easier,” she said. “I got a lot of assists last year, just feeding her the ball, she finished pretty much everything I gave her.”

The ability to contribute in several attacking spots was another trait that Church saw in Stevens during the recruiting process, and something that will help her fit into a talented Duke team later this year.

“She can play as your 10, she can be a number 7, number 11, she’s been playing as a No. 9,” he said. “We want her close to goal, we want her near the goal because she has the ability to play players in, score goals herself.”

Stevens now has yet another accomplishment to lean on when she steps on campus this fall in Durham. But she’s not getting carried away, even after being named the best girls soccer high school player in the country.

“I definitely think it’s going to be a huge culture shock and a huge challenge,” she said about playing at Duke. “The girls I’m going to be playing with, they’re elite athletes and some of the best in the country, especially being in the ACC…I’m definitely going in very humbled and very appreciative of being there. Hopefully I can show them what I’ve got and make a difference.”