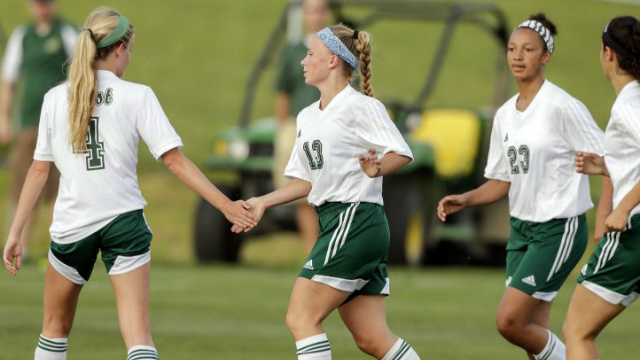 * Kylie Bechard, Harris County (Ga.), So.: Every now and then, there's a standout club performer playing on a high school team that flies well below the radar. Such is the case with Bechard, who plays club for Birmingham United. The sohpomore has committed to Auburn. On the high school side, she has a staggering 57 goals this season.

* D Janai Cedeno, Jones College Prep (Ill.), Sr.: Take away a lopsided loss to West Aurora, and Jones College Prep has allowed only nine goals during a 13-2-1 start. Cedeno, an Eclipse club player, has been the anchor. She is committed to UIC.

* F Emma Cooper, Iowa City West (Iowa), Sr.: The Michigan signee had three goals and three assists last week as Iowa City West climbed to 9-0 on the season. With other NCAA Division I-bound teammates on the team, Cooper does not have to produce all of the offense. Howeverm she does have 10 goals this season, and is on pace for a 20-goal season.

* F Sophie Jones, Claremont (Calif.), So.: Jones netted 23 goals while helping Claremont to a 25-4-2 season, but her high school soccer future is in doubt. Jones plays for Slammers FC, one of the teams headed to the new Girls DA in the fall, which might preclude her from playing high school soccer. Jones was named the Inland Valley Daily Bulletin Player of the Year. Jones has committed to Arizona.