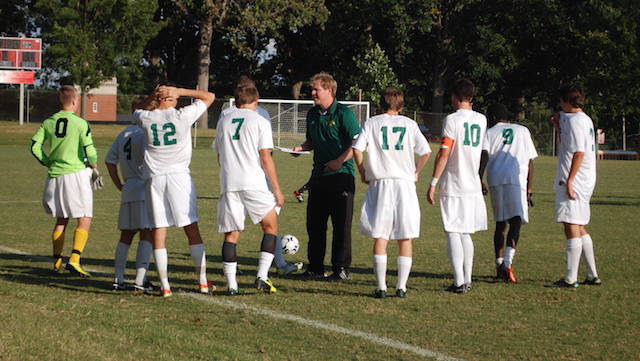 The storylines are almost endless at the Gateway City Soccer Classic. Here are 10 things to watch, but make sure to check the daily recaps as new items will surface each day during the event.

Earning Their Place: Five SIMA FAB 50 teams will be competing at the Gateway City Soccer Classic, yet only two of them — No. 29 St. Thomas Aquinas (Kan.) and No. 39 Cherry Creek (Colo.) have a chance at meeting. No. 4 Milwaukee Marquette (Wis.), No. 7 Rockhurst Jesuit (Mo.) and No. 44 Washburn Rural (Kan.) are in separate brackets, which creates a chance for four of the current FAB 50 teams to win bracket titles this year.

March Toward No. 1: Milwaukee Marquette is facing an interesting weekend. The perennial Wisconsin power is up to No. 4 in the SIMA FAB 50, yet faces two of the Prep Top 10 teams. Losses to prep school programs, since both use post-grads, is not a major knock for a high school team, but a pair of victories would be hailed as quite an accomplishment. In Marquette’s case, the current No. 3 team already has a tie this week, meaning a perfect showing at Gateway for Marquette would mean at least a one-spot jump in next week’s SIMA FAB 50. As a side note, Marquette has won bracket titles in its last three Gateway appearances, spanning five seasons. Wisconsin High School Athletic Association’s out-of-state competition rules, coupled with Marquette’s other commitments, prevented the team from competing in the 2013 and 2015 Gateway events.

Playing The Odds: History indicates one of the St. Louis Metro Catholic Conference teams is due for a bracket title this year. Since the event started in 2005, Chaminade, Christian Brothers College, DeSmet and Vianney have combined for eight bracket titles. The St. Louis powerhouse conference has never gone two years without a champion at Gateway, and right now, Chaminade’s 2014 crown is the last won by the league.

Small State Blues: Barrington (R.I.) and Chaparral (Nev.) are making their Gateway debuts this weekend. History has not been kind to programs from these developing soccer states. Throw in Kentucky for good measure, and none of the nine schools from those three states have a winning record at Gateway. Is this the year Barrington, Chaparral and/or one of the three Kentucky teams provide a breakthrough performance?

Battling Back: Quincy (Ill.) standout James Sohn, a TeamSnap All-America Watch List performer, was injured a few weeks ago. Sources at Quincy indicate he is hoping to make a return to the lineup this weekend. The Blue Devils, who have maintained a Top 10 state ranking without Sohn, could find themselves back in the SIMA FAB 50 with a strong showing this weekend.

Prep Top 10: When the Gateway schedule was set, South Kent School (Conn.) was ranked No. 1 followed by Kiski School (Pa.) at No. 2. The organizer paired the programs up for what could have been a battle for No. 1 on the opening night of Gateway competition. Kiski, however, started slow and carries a 4-3 record into Gateway. South Kent, meanwhile, is undefeated and remains No. 1 in the Prep Top 10. Still, Thursday’s head-to-head match could prove important this season since there are few chances from top Pennsylvania independent schools and New England prep schools to go head-to-head. And, although Kiski and South Kent are a six-hour car ride from each other, and they played on adjacent fields two weeks ago, they are flying to suburban St. Louis for their first ever head-to-head meeting.

Scoring Machine: Billy Hency of Rockwood Summit (Mo.) has 14 goals and 12 assists so far this season, making him likely the highest scoring player entering the top flights of the tournament. Hency has scored a goal and/or an assist in 12 of Summit’s 15 matches.

Mile High: Cherry Creek (Colo.) has been a fixture at the Gateway event for the better part of the past decade. The team always has competed in one of the top two flights at the Gateway, regardless of the team’s strength in a given year. Cherry Creek comes in as one of the few undefeated squads, but this will be a step up in competition again this year. The four Colorado teams that have competed at Gateway have combined for a 24-34-2 record.

Round Robin A: Top to bottom, the most competitive group appears to be Robin Round A, which features SIMA FAB 50 No. 44 Washburn Rural (Kan.) along with recently ranked Collinsville (Ill.) and Lee's Summit West (Mo.). The wild card in the group will be how Barrington (R.I.) fares.

Bracket D: While most of the attention is given to the A & B brackets, Bracket D offers two nationally intriguing teams. Evansville Memorial (Ind.) has been a ranking fixture the past decade, and the team spent time in the SIMA FAB 50 this year before losing back-to-back matches two weeks ago. This is the final weekend for regular season play in Indiana, and the last chance for the Tigers to make a regional impression. By contrast, also in the group, is Glenbrook North (Ill.), a team with a 12-1-1 record and only a loss to SIMA FAB 50 No. 25 St. Charles East (Ill.). Winning a bracket title at Gateway could vault Glenbrook North to its first ever SIMA FAB 50 ranking.