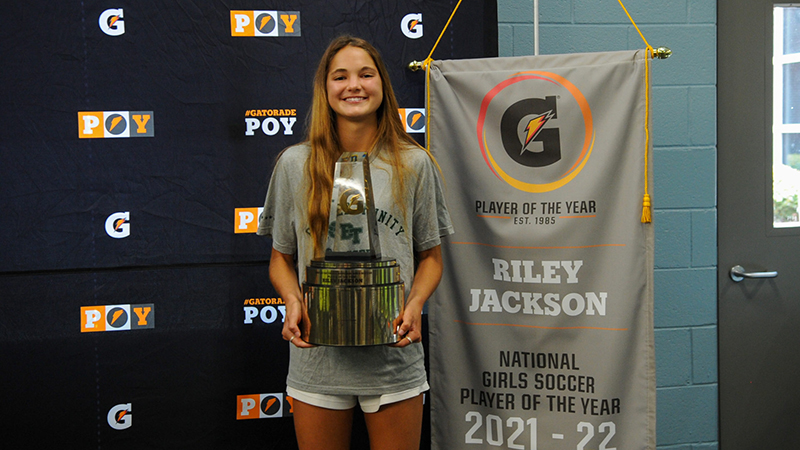 In its 37th year of honoring the nation's most elite high school athletes, Gatorade today announced Riley Jackson of Blessed Trinity Catholic High School in Roswell, Ga. is the 2021-22 Gatorade National Girls Soccer Player of the Year. Jackson won the prestigious award for her accomplishments on and off the field, joining an impressive group of former Gatorade National Girls Soccer Players of the Year who have combined for 17 gold medals and nine National Championships

Chicago Red Stars forward Mallory Pugh virtually surprised Jackson with the news, while her family, coaches and teammates showed up with the trophy at school.

The award, which recognizes not only outstanding athletic excellence, but also high standards of academic achievement and exemplary character demonstrated on and off the field, distinguishes Jackson as the nation's best high school girls soccer player. The Gatorade Player of the Year Selection Committee, which leverages experts including coaches, scouts, media and others to evaluate candidates, selected Jackson from nearly half a million other student-athletes who play girls soccer nationwide.

Competition for the national award was fierce. Jackson topped the list of state winners in girls soccer who collectively boast an incredible list of accomplishments, including 22 First Team All-State selections, 7 returning state Gatorade Players of the Year and 38 who are committed to play at Division I colleges/universities.

“Riley Jackson is that rare player who can influence the outcome of the game without showing up on the scoresheet,” said J.R. Eskilson, a national soccer analyst for Prepsoccer.com. “She’s one of the best passers in high school soccer, identifying through-ball channels that few players can envision, and she has the skill to put those passes into tight windows. She also has the elegance on the ball to make everything look effortless, but there is so much sophistication in how she approaches the game. That’s what really makes her great. What’s more, she’s a wall defensively, and dictates where the game is played on the pitch with her challenges and instincts for stepping in front of passes. Jackson had one of the best seasons in high school soccer history by making her teammates better, and that’s part of what makes her worthy of being the Gatorade National Player of the Year.”

The 5-foot-8 sophomore midfielder scored 14 goals and passed for 18 assists this past season, leading the Titans (19-2-1) to the Class AAAAA state semifinals. Jackson missed the high school postseason while she was leading the U.S. Soccer U17 Women’s National Team to the championship at the CONCACAF World Cup qualifying tournament. Jackson was the Golden Ball winner, awarded to the tournament’s best player. Also the Class AAAAA State Player of the Year, she concluded her sophomore year with 36 goals and 48 assists in her prep soccer career.

Jackson has maintained a weighted 4.26 GPA in the classroom. She will begin her junior year of high school this fall.

"Riley Jackson is now a part of an elite alumni group of past Gatorade Players of the Year, including athletic icons such as Peyton Manning and Abby Wambach,” said Gatorade Senior Vice President and General Manager Brett O’Brien. “She has proven why her name belongs on the trophy and we have no doubt Riley will go on to accomplish great things in and out of sport like so many POY winners before her.”