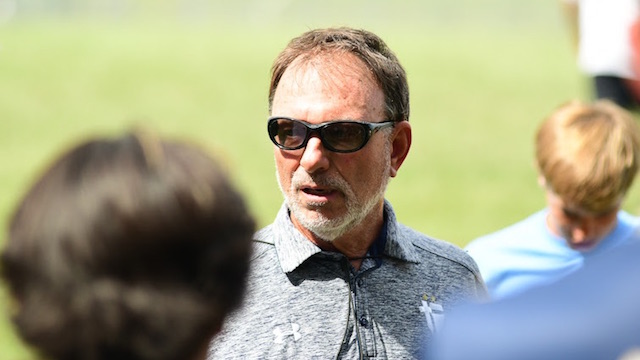 OVERLAND PARK, Kan. — Grace O'Keefe scored two goals in the final 15 minutes of the annual Blue-Gold scrimmage at St. Thomas Aquinas last Wednesday, leading the Starting 11 to a come-from-behind win over the Second 11.

The result left everyone feeling good about the night as the girls huddled one last time.

"We always do a prayer and then players can offer up Thanksgiving," St. Thomas Aquinas coach Craig Ewing said. "We were going on spring break, so there were a lot of 'safe travels' offerings. And then we [broke the huddle] … S … T … A … SAINTS."

Little did Ewing know, that would be last cheer for the season — and for his girls coaching career. Late Tuesday night, the governor of Kansas, citing a need to stem the spread of COVID-19, shut down all K-12 schools for the rest of the school year. The state's athletic association followed up Wednesday around 5 p.m. EST with a press release officially shutting down all spring high school sports for the year, effectively ending the career of the state's all-time winningest coach

Ewing, who set the gold standard for coaching success in Kansas, previously announced that the 2020 spring season would be his last as the program's girls soccer coach. He will remain the boys coach in the fall for 2020. But there's no turning back from his girls coaching decision as the school might have selected a new coach for next year but has not named the person yet, Ewing said.

"It's sad, but there's nothing you can do," said Ewing, who sported a 465-126-4 record in the 31 years as the only girls soccer head coach in St. Thomas Aquinas history. Under Ewing's leadership, the Saints won 16 state titles, finished as a runner-up four times and appeared in national rankings in 13 different seasons. Year No. 32 was supposed to be special. The team entered the season ranked No. 3 in the state, No. 5 in the region and was a few early season wins away from being a SIMA FAB 50 program. Events were planned throughout the season as Ewing made one last go-around the Eastern Kansas League circuit.

"Everyone is doing what they think is best, but it is unfortunate for a lot of people," Ewing added. "[College and high school] spring athletes will not be able to complete things in the natural progression, and it's sad."

When the news broke Tuesday evening, Blue Valley Southwest coach Erik Jones went straight to social media, summing up the thoughts and feelings of many coaches.

"This is a tough tweet to send," he wrote. "Girls I'm sorry we didn't get to leave it all out on the field. These are tough times for everyone. To you seniors all I can say is thank you and I am sorry. We will miss you greatly. The legacy you have left will be forever cemented in SW history.

"The thing I will miss the most isn't the games or the practice, it's just having the opportunity to be with you all everyday. Please take care of each other safely."

Washburn Rural coach Brian Hensyel isn't the social media type. He said he is hoping to meet with the team personally to share his thoughts.

"This is a surreal experience," he said. "We've all had individual players whose seasons have been cut short by injury and we've had to deal with that. But this ... every player. The whole team. This is a unique situation."

Hensyel said he is hoping this summer to get the group together to honor the five seniors he had on the roster.

"These girls have been in the state final the past two years and they had their heart set on breaking through this year, and now they won't get that chance ... this is tough," he said.

Following Wednesday's Blue-Gold game, there was school Thursday at St. Thomas Aquinas, but the end of the school day marked the beginning of spring break. At that point, Ewing knew the season would be delayed until early April. But there was no way to envision how quickly things unfolded from there.

"What an interesting year to retire," Ewing wryly said. "I was enjoying my last year. We had class on Thursday and I was expecting a week-and-a-half break and then getting into the girls season. I was really looking forward to it."

Ewing said his principal kept the staff updated every step of the way.

"There was something new every day," Ewing said. "It was in stages."

First came the delayed start to the season. Then there was an extension of school shutdowns.

Talk in soccer circles turned to the possibility of holding a small tournament in June, after the school year, in order to salvage some small part of the season.

"We were given a copy of a statement that schools were shut down for the rest of the year," Ewing said. "Someone asked, 'What does that mean for spring sports?' The response we got was, 'Everything is over for the year.'"

The KSHSAA confirmed that fact Wednesday.

"I reached out to [Ewing] to say I'm sorry for the way it ended for him," said Jones, who briefly served as an assistant at St. Thomas Aquinas in the early 2010s. "With all he has done, he deserved to go out on his terms. It's too bad that he didn't have that final full season with his girls."

School will resume in a distance-learning format, but Ewing will not be back in a classroom. In fact, he's not sure when he can even access his classroom. "I'm hearing it could be as late as June."

Hensyel, like many teachers, will pivot to an online education format for the rest of the year, and took a positive approach.

"I overheard one of my colleagues say, 'I'm past the shock, and I'm ready for the challenge,'" Hensyel said. "As coaches, that's what we'll do to get through this."

Ewing said he had created a group chat to keep his players and their parents up to date.

"I brought them along, they knew what was happening every step of the way right after I did," he said. "There were a lot of sad comments, sad faces. A lot of that has been shared, some [players and parents] sent direct messages. Everyone is feeling their way through this right now."