Charlie Killebrew, a senior forward from Central Davidson High School (Lexington, N.C.), and Gabrielle Brummett, a freshman forward from The Derryfield School (Manchester, N.H.), are the NSCAA/TopDrawerSoccer.com High School Players of the Week. 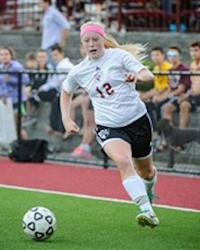 Over the course of his four years at Central, Killebrew has helped to pull the team up to new heights. He set the program record for assists last year, and he snapped the school mark for goals earlier this season. And last week, Killebrew put the capper on arguably the most impressive week of his career with five goals and six assists. He scored the game-winner in overtime to beat Ledford 3-1 and launch Central to its first Mid-Piedmont Conference title in program history. He followed that up with two goals and four assists to be involved in every goal in a 6-2 win over SW Randolph. Finally, he capped his last ever regular season game with two assists and the game-winning goal on senior night to push his career totals to 116 career goals and 84 assists. Central will open the playoffs after a 20-3-0 regular season.

For her part, Brummett has played a massive role in Derryfield’s climb to a 15-1-0 record and a second-place spot in its region. Despite being just a freshman, she’s seamlessly slotted into the team’s dynamic and has an incredible 56 goals and 15 assists through a mere 16 games. Last week, the two-footed player put on a show with an unreal 19 goals and one assist in three wins, cementing her status as one of the team’s youngest go-to threats.

The NSCAA/TopDrawerSoccer.com High School Player of the Week honor is designed to highlight a selection of the nation's rising stars populating the high school ranks. Coaches are free to nominate a boys or girls player each week through our submission form that can be found here. The selection process will take into account a slew of factors from contribution to team results to individual accolades. Honorees are announced each Wednesday.

The next submission deadline will be noon (CT) on Nov. 4 before the Player of the Week announcement on Nov. 6.

Founded in 1941 and based in Kansas City, Kan., the National Soccer Coaches Association of America (NSCAA) is a non-profit organization with a mission to educate coaches, encourage excellence and serve the soccer community.

The NSCAA is the world’s largest soccer coaches’ organization with members at every level of the game. The membership is primarily made up of coaches, but also includes administrators, referees and others in the soccer industry. The NSCAA provides its members ways to enhance the game of soccer by providing a national education program, interaction and networking opportunities, and membership benefits.

For more information about the National Soccer Coaches Association of America, visit NSCAA.com.