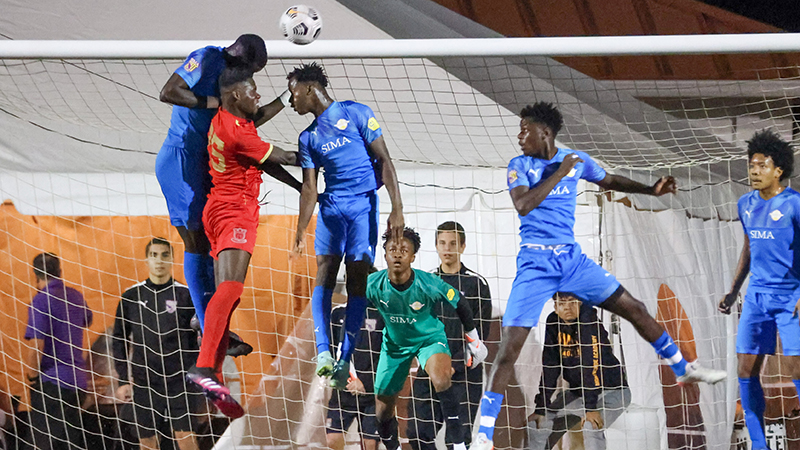 MONTVERDE, Fla. – Despite only eight teams participating this year, the 10th annual Montverde Academy Soccer Tournament showed off the best that Florida’s academies had to offer.

Now that the event is over, TopDrawerSoccer compiled its Best XI from the event.

F Stephen Annor, SIMA Gold: The MVP of the entire tournament, the poaching forward scored a hat-trick in the final and six goals all tournament to get the nod. A good player in the air and with his feet, Annor did his best work with balls being fed into him and finishing them off with power.

F F Malang Mandiang, SIMA Gold: The pacey winger was a danger in every match down the left flank, feeding balls in for his teammates, notching three assists in total. A good eye for assists, but also scored a goal from the wing in the three games he played in.

F Dylan Talero, Florida Prep: The former Inter Miami CF academy product scored four goals in the tournament, a hat trick in the first match, and a free-kick game-winner in stoppage time in the 3rd place match. Put himself in good attacking positions and showed good strength on the ball.

M Ali Fadal, SIMA Gold: Fadal is arguably the most pro-ready player in the tournament. A hawk for the ball in the middle of the park, Fadal was bodying players out of possession and feeding passes forward from his deep-lying midfield spot. Scored a couple of goals for his efforts as well.

M Misei Yoshizawa, SIMA Gold: Despite not registering many in-game stats, Yoshizawa was one of the most dynamic playmakers in the tournament. A player that isn’t overly strong or athletic, the midfielder uses his body well and has a good center of balance to make plays through contact. Created a number of attacking chances throughout the tournament.

M Thomas Duffin, Florida Prep: A decent box-to-box midfielder, Duffin was a solid presence for Florida Prep through his three games played. Scored a beauty of a free kick in the 3rd place game from about 30 yards out.

M Lochard Wilson, Leg A-Z: A standout player for Leg A-Z, Wilson was quick, dynamic, and made some head-turning plays. Scored a few goals with his left and showed good positioning in offensive attacks, both from the midfield and in the forward roles.

D Shawn Smart, SIMA Gold: The Clemson commit was consistent through the entire tournament, providing service in the attack and coverage defensively. His speed and decision-making in the defense was a benefit to SIMA’s attack in the tournament.

D Pape Mar Boye, SIMA Gold: One of the biggest players on the field in the tournament, the center-back was a presence to be reckoned with in the backline, breaking up plays and stopping anything coming his way. Scored a goal off a set piece in the second game as well.

D Marc Chin, SIMA Gold: Playing as a left-back for the first time in the first time in his career, Chin was solid defensively and had good positioning to snuff out attacks down the wing. The Syracuse commit was also accurate with many of his balls from the defensive third, often springing attacking chances throughout the matches.

GK Joseph Andema, SIMA Gold: Conceding zero goals over the course of the three matches, Adenma was only called upon a handful of times, but was solid when needed. Athletic and good with his feet, he impressed between the posts.