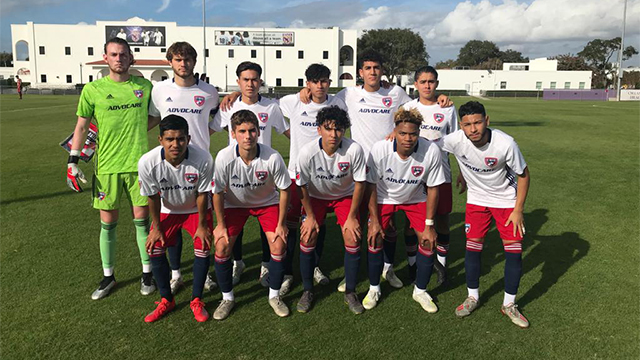 And because of that, FC Dallas celebrated a MAST Super Group title after stunning heavily favored SIMA Gold 4-1 in the final Saturday night at Montverde Academy.

FC Dallas' victory made it a Development Academy sweep at the event, as Baltimore Armour scored a 3-1 victory over Vaughan Azzurri SC (Canada) in the MAST Elite/High School bracket earlier in the evening.

SIMA Gold rolled through the Super Group round-robin portion of the event, winning all three matches while racking up nine goals. SIMA Gold handled FC Dallas 3-1 in the group meeting in a match not that was not as close as the score indicated.

From there, FC Dallas battled out of bottom of the group standings, first tying Valencia CF 1-1 and then beating Jacuipense (Brazil) 2-0 to earn a rematch with SIMA Gold in the final.

"The difference was the attitude," Vera said about FC Dallas flipping the result from a 3-1 loss to a 4-1 win four days later. "FC Dallas is good quality and [dominates] in the Development Academy. But playing here permitted the guys to recognize there's another level.

"To me, the result is important, but it's more important we learned there's another level of play we needed get to," Vera added.

"We came out stronger and played with more passion from the beginning," FC Dallas midfielder Cesar Reyes Garcia said.

The match started at breakneck pace as both teams were up and down the field. Ten minutes in, though, it started to look like the outcome would be a repeat of their Tuesday meeting as SIMA Gold was awarded a penalty kick and Macoumba Ba converted for a 1-0 lead.

Ten minutes, later, though, FC Dallas earned a penalty kick and Beni Redzic converted to even the match at 1.

SIMA Gold had several chances to regain the lead, but shots went wide, high or were saved by FC Dallas keeper Seth Wilson, a Clemson signee.

Against the run of play, Gibran Rayo gave FC Dallas a 2-1 lead with 11 minutes left in the match. Malik Henry-Scott, a Tulsa signee, made it 3-1 and Tanner Tassmann closed out the scoring, making it 4-1.

"We knew what happened the last time, and honestly, I was very nervous," Wilson said about his pre-match thoughts. "But once I made that first save (which came on a SIMA Gold breakaway), all the nerves went away.

Connecticut commit Giancarlo Vaccaro made a sweet move to his left to create space then ripped a shot far post to give Vaughan a 1-0 lead.

Baltimore Armour scored the equalizer with 19 minutes left in the match as Richard Nichols rose above the defense to head home a corner kick from Benjamin Bender. The goal seemed to energize Baltimore, which then threw wave after wave of attacks on Vaughan's defense. Finally, Armour surged ahead with 11 minutes remaining as Kyle Brown redirected a Jake Dengler cross into the goal.

"I had a chance in the first half and couldn't score," Brown said. "I was disappointed in myself and had a chip on my shoulder. I needed to make up for it. So, when I saw the ball go wide to Jake, I know he can serve good passes, I just went to toward the goal to get into position."

"We didn’t respond well to their first goal," Vaughan coach Patrice Gheisar said. "It was like we got a flat tire and couldn't fix it."

Even as Baltimore Armour took the lead and had control, Vaughan started to press and had a golden opportunity to even the match with four minutes left. A header inside the 6 seemed destined for the net, but Armour keeper Grant Farley made the play of the night, diving toward the ground and getting a hand on the ball to keep it out of the goal.

"It was a reaction save," Farley said. "No time, just reaction."

Baltimore Armour coach Mike Lookingland described the victory as a gutty, typical Baltimore blue collar win. "We scrapped one out."

In the Elite/High School bracket consolation, West Ottawa scored three goals in the final 15 minutes to stun Montverde Academy 4-2. The Eagles had built a lead on goals by John Atem Kato and Joao Pedro Souza. Nicolas Fleuria scored the first and fourth goals for West Ottawa. Ronan Kratt and Lars Gierull scored the other goals.