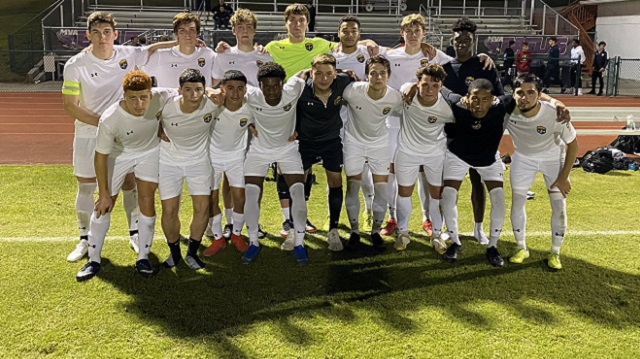 MONTVERDE, Fla. -- Score one for the Development Academy.

Then, in the night’s showcase match, Baltimore Armour stunned Montverde Academy 3-1 in the MAST High School bracket, handing the home side its first ever MAST tourney loss in this eight-team format.

"We came here to showcase our product," Baltimore Armour coach Mike Lookingland said. "And to beat a team like Montverde shows the type of players and product we have -- when we have our [full] team."

Baltimore Armour lost seven of eight Development Academy matches while its core players were competing in high school soccer during the fall. At full strength, Baltimore Armour is 6-1-1 since, and now will take on Vaughan Azzurri of Canada in the MAST High School bracket final on Saturday.

Baltimore Armour’s 3-5-2 formation posed problems for Montverde, and the Maryland-based team struck early. Villanova commit Branden Johns used his speed to race past the Montverde defense and finish about 10 minutes into the contest. Kyle Brown gave Baltimore Armour a 2-0 first-half lead, finishing a cross from Loyola (MD) commit Kevin Medrano. Montverde cut the lead in half late in the first half when Edward Mensah, after getting stuffed on his penalty kick attempt by Armour keeper Grant Farley, was able to collect the rebound and score.

Montverde had the better of play early in the second half, but Maryland commit Benjamin Bender put the match out of reach with a late header.

When the final whistle sounded, several Montverde players sunk to the ground and the once excited crowd was silenced by the rare home loss.

Entering the final robin-robin contests in the MAST Super Group, FC Dallas, Jacuipense and Valencia all were still alive for a berth in the final against SIMA Gold.

Cesar Garcia and Nicolas Carrera scored for FC Dallas as the Development Academy team defeated Jacuipense to finish 1-1-1. Jacuipense ended 0-2-1. Despite the win, FC Dallas was not guaranteed a spot in the final until later in the evening when SIMA Gold handled Valencia 5-2.

Jacuipense and Valencia will square off in the third-place match. The teams tied their first encounter.

F Kyle Brown, Baltimore Armour: One of the unrrated players on the Armour roster, but always finds ways to be productive. On this night, he scored a goal to put the team comfortably ahead 2-0. Coaches say he keeps getting better and better.

F Lucca Dourado, SIMA Gold: A true finisher. He scored the first two goals of the match to put SIMA Gold in complete control. He keeps it simple, and produces.

M Ali Fadal, Montverde Academy: One of the recent additions to the program, Fadal is a dynamic player who is very involved in the action. He projects as a real standout in the future.

M Cesar Garcia, FC Dallas: He was one of the team’s standouts in the second group match, then was rewarded by scoring a goal in the third match as FC Dallas advanced to the final.

M Fabio Blanco Gomez, Valencia CF: Gomez delivered a perfect set-piece goal and then added a goal during the run of play.

F Branden Johns, Baltimore Armour: He might not be the team’s top scorer, but his raw speed stretches defense and commands attention. He scored the first goal in what proved to be a 3-1 Baltimore Armour victory Friday.

D Jose Joya, Baltimore Armour: Joya was part of a defense that held Montverde scoreless from the run of play.

F/M J.T. Kamara, SIMA Gold: One of several dynamic players on SIMA’s roster. As the coach put it, “you don’t know what he’s going to do, but whatever it is will be exciting.”

M Kevin Medrano, Baltimore Armour: The Loyola (MD) commit was the catalyst of the Armour attack. He has good vision, served up an assist and was a solid team player.

D Edward Mensah, Montverde Academy: Mensah scored Montverde's only goal and was one of two MVA players signaled out for stepping up to the challenge of Baltimore Armour.

D William Nascimento, SIMA Gold: After not geting much time earlier in the tournament, Nascimento was given a chance Friday and played a very consistent match.