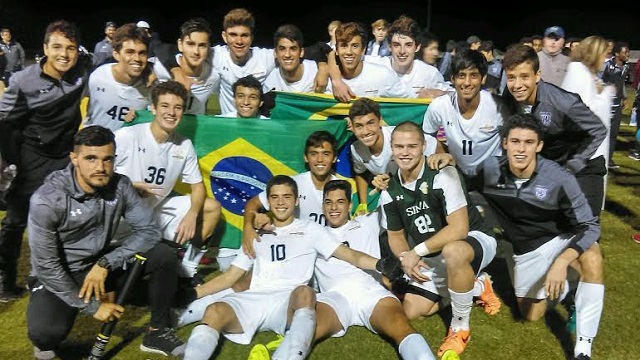 MONTVERDE, Fla. – Kizza Edward has a way of removing any drama from games.

The standout forward scored two goals and had one assist – in the first 12 minutes – as Montverde Academy (Montverde, Fla.) built an early 3-0 lead en route to a 4-1 victory over Paramount (Calif.) in the Montverde Academy Soccer Tournament final Saturday night.

Edward finished the three-game event with four goals and three assists, all coming in the first 20 minutes of each match.

"I had the one assist, and that made me hungry to get one (goal) of my own," said Edward, who assisted Rodrigo Almeida a mere 72 seconds into Saturday’s final. Edward's first goal came 3:50 into contest. "It was a good feeling. It changed the game."

Edward and Joshua Jackson netted Montverde Academy’s last two goals as the team completed a seventh straight undefeated season with a 20-0-1 record. The Eagles will carry a 157-match undefeated streak into the 2017-18 campaign. The MAST title also wraps up a fifth straight SIMA FAB 50 Winter No. 1 ranking, and sixth in the past seven years.

Montverde Academy defeated Watsonville (Calif.), [St. Paul’s la-m] (Covington, La.) and Paramount at the sixth annual MAST and in each match the Eagles had a 3-0 lead by 15 into the game.

Paramount coach Rafael Villasenor simply summed it up Montverde as, "They're just unbelievable."

Paramount avoided a shutout when Christian Perez slotted a shot past a reserve keeper in the second half, giving him four goals for the event. Perez and Edward shared the Golden Boot Award. Edward was named MVP, and Virginia commit Connor Jones earned the Best Goalkeeper honor after not allowing a goal in his two appearances.

Montverde's third straight early 3-0 lead allowed Potempa to turn to the bench early in the match. By the second half, Edward was the lone starter on the field. While a couple starters returned throughout the second half, Montverde, which has more than 150 players in the SIMA soccer program, was able to use nearly 30 players. Potempa confirmed after the match that at least 75 players saw time in the MAST for Montverde.

When asked what separated this team from recent undefeated Montverde squads, Potempa was quick to point to the team’s depth.

"We can put a lot of players in the game and the level keeps rising, or at least it doesn't go down," he said. Potempa also cited the program's strength in player development and retention, saying six starters Saturday have been at Montverde since ninth grade, or even earlier in Montverde Academy's middle school. "Those guys worked through the JV program and here they are starting the final."

After the shock of falling behind 3-0, Paramount settled in and gave Montverde a better test over the final 65 minutes. Perez and fellow frontrunner Bryan Duarte showed their speed, getting behind Montverde defenders and creating a few chances.

"We'll learn from this," Villasenor said. "We’ll play with more intensity … this is the highest level of soccer right here (at the MAST), and our kids never gave up. I’m proud of the boys."

THIRD PLACE: The Woodlands 1, St. Paul’s 0 – A long throw by Christian Anderson found the foot of Julen Ormaza, who netted the lone goal in the consolation match. The goal was the only one scored by The Woodlands during the event.

FIFTH PLACE: Gulliver Prep 4, Tampa Jesuit 2 – Gulliver scored the last two goals to pull away from Tampa Jesuit in a match where five goals were scored in the second half.

SEVENTH PLACE: Pembroke Pines Charter 4, Watsonville 0 – Rodrigo Souberville scored the first and last goals as Pembroke Pines defeated Watsonville. Keeper Matthew Levy, who has been training with the Jamaican Youth National Team, posted the shutout and had an outstanding diving save to keep the game at 1-0 in the second half. Levy did not play in the team’s loss to Paramount.

GK Connor Jones, Montverde Academy (Fla.), Sr. – The Virginia-bound senior delivered a shutout half of soccer for the Eagles, which used three keepers during the event. Jones did not allow a goal in the tournament.

F Christian Perez, Paramount (Calif.), Sr. – Even with the game out of reach, Perez played hard and was rewarded by scoring a goal – his fourth at the event. Perez shared the Golden Boot honor with Kizza Edward.

MF Joao Lucas Santos, Montverde Academy (Fla.) -- Santos had an assist and was very dangerous with the ball at his feet. He earned all-tournament honors in large part due to his Saturday performance.