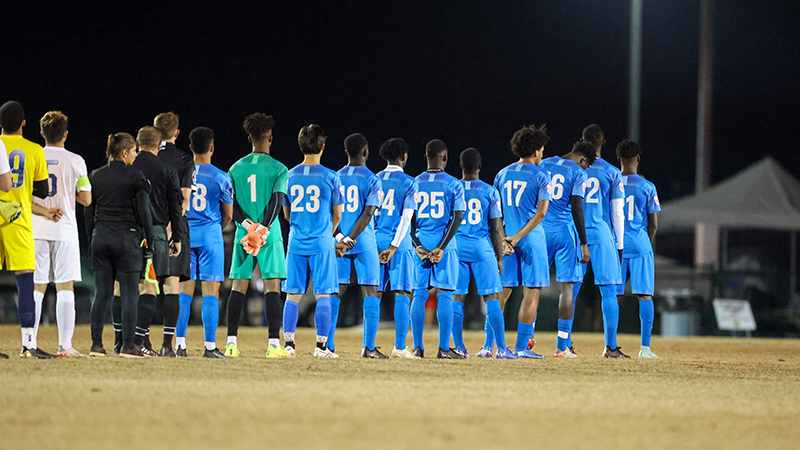 MONTVERDE, Fla. – The 2022 MAST championship match is set as SIMA Gold and Leg A-Z advanced through the semifinals on Friday night.

Leg A-Z pulled out a significant 3-2 win over SIMA Elite in the first semifinal of the winners bracket, preventing an all-SIMA final.

“I feel we played well,” Leg A-Z coach Darnell Bernier said after the match, “The first half, we were still feeling the game out and then the second half, we made some adjustments and were able to put them under the gun, which helped us get where we needed to get the result.”

After SIMA Elite struck first in the opening fifteen minutes thanks to a tap in by Joao Lucas Santos, Leg A-Z’s Spencer Louis Jean smashed a strike from outside the box to level things up at 1-1. SIMA’s Abdul Musah would break the deadlock before halftime with his own spectacular strike, a half volley from just inside the box, putting his side up 2-1 heading into half.

That would be the last goal SIMA Elite would score, however. Denilson Macon would capitalize on a breakaway, slotting home a near post finish to draw the game level, and Lochard Wilson would score the eventual game-winner just five minutes later. A costly turnover by SIMA defender Pedro Arruda gifted the ball to Wilson, who struck it first time past goalkeeper Zander Bates, putting Leg A-Z into the final.

“We've been quietly doing things behind the scenes,” Bernier said, “Now everyone's starting to recognize that we really do have some players. I thank Montverde for allowing us to come here, so people can see the reality. What we have otherwise it's me just telling people, but it's always better just to show them and get on that stage. And for us to make this final is telling you a lot about what we have.”

In the other semifinal in the championship bracket, SIMA Gold dominated the majority of the match against FC Florida Prep Academy, winning by a score of 3-0. Canadian International legend Dwayne De Rosario was in attendance as his son, Adisa, started in goal for Florida Prep, showing out some spectacular saves. But SIMA’s star studded team was enough to push past a solid defensive line to make their way to the final. Pape Mar Boye would score the opener for SIMA off a corner, which the centerback headed into the back post.

Stephen Annor would add a second before half, tapping in a parried shot by Misei Yoshizawa. Annor would score his second and the third for SIMA just minutes into the second half, putting away a cheeky back heel in the box. The rest of the second half was solid defensive work by Florida Prep to hold the Montverde offense to one goal in the half, but ultimately the result went to the way of the hosts.

Now Leg A-Z will face off against the best the tournament has to offer tonight at 8:00, to see who will be crowned the top team of MAST 2022. Despite the daunting task, coach Bernier says that his players are prepared and ready for the challenge.

“I told them you got here, you deserve to be here. Our talent is real. So now it's just a question of putting it all together. SIMA has some more experience than us in terms of always playing at these levels because we're new to this in that way. But I'm very confident in the players I have and just go enjoy the experience. What do you need to be fearful of? It's a showcase competition. You're here to play against the best teams. We got to the final, so here you go.”

M Ibrahim Awal, SIMA Elite: A young player under 15 years old, Awal is a player with good composure and speed, looking much more mature on the pitch than his age. Had some flashes that showed his potential.

D Julian Restrepo, FC Florida Prep: Part of the backline that held SIMA Gold to one goal in the second half of the game. Good positioning and reading of attacking players as well as good timing on challenges in and around the box.

M Misei Yoshizawa, SIMA Gold: Created two of the three goals scored by SIMA Gold. Strong on the ball and a quick decision-maker, Yoshizawa is already being looked at by some MLS sides as a future player at that level.

GK Adisa De Rosario, FC Florida Prep: The son of Dwayne De Rosario, Adisa showed out vs the potent attack of SIMA Gold, making some spectacular and acrobatic saves. Despite allowing three goals, the keeper put on a show in the second half and is making his own strides towards next level play.

F Lochard Wilson, Leg A-Z: A player the Leg A-Z staff are excited about, Wilson is quick, decisive and has a powerful shot. A versatile attacker, he played as a winger and striker in the match, looking comfortable throughout.

D Pape Mar Boye, SIMA Gold: The dominating center half scored in the first half of the match and held a clean sheet through the 90 minutes. Has already represented Senegal in the Beach World Cup at the senior level.

D Shawn Smart, SIMA Gold: The Clemson commit played another solid 65 minutes and, much like Thursday night, was excellent on offense in chance creation, and on defense in shutting down the play from the wings.

F Denilson Macon, Leg A-Z: Had an incredible strike to score the equalizer early on for his side. Had dangerous moments throughout.

F Abdul Musah, SIMA Elite: Another future product in the making that is under 15 years old, Musah scored a banger in the first half to put his team up in the moment. A player that is tall and good with his feet up top.

F Stephen Annor, SIMA Gold: A poaching center forward, Annor has scored three goals in this tournament, two on Friday, all off loose balls in the box. A player with those instincts can be invaluable at the next level.