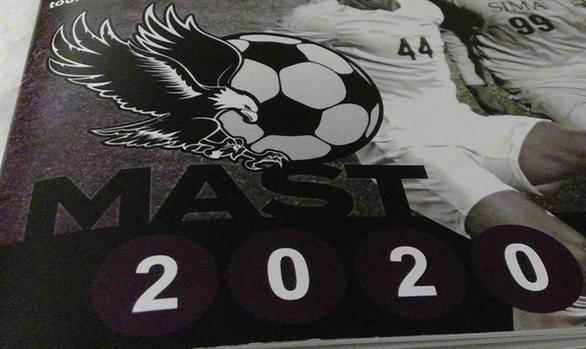 Welnilton Rodrigues and William Nascimento, student-athletes at Montverde Academy, faced Jacuipense, the Brazilian club team on which the pair previously played before landing in Montverde, Fla.

"There's a saying in Brazil that you have to score when you play your former team. I hit the post," laughed Rodrigues while shaking his head about the near goal.

Although a goal by Rodrigues would have iced the match on this chilly evening in central Florida, it was not needed.

SIMA Gold, behind a dominating first half, held on for a 1-0 victory over Jacuipense in the MAST Super Group. SIMA Gold is 2-0 in the event, previously beating FC Dallas 3-1 on Tuesday. Six points through two matches almost seals a spot in the final for SIMA Gold, which next faces Valencia CF on Friday.

In other MAST action Wednesday, FC Dallas and Valencia tied 1-1 in Super Group play and Baltimore Armour handled Clearwater Chargers 5-1 in the opening round of the MAST High School bracket.

SIMA Gold is 2-0, Valencia is 0-0-1, FC Dallas is 0-1-1 and Jacuipense is 0-1 through Wednesday. Valencia and Jacuipense square off Thursday, and the winner is in the driver’s seat to reach the final on Saturday.

Baltimore Armour advances to the MAST High School semifinals. The three other first-round matches, which will fill the semifinal bracket, will be played Thursday evening.

With more than 50 NCAA Division I coaches in attendance, SIMA Gold put on a display of speed and skill in the first half. The team was rewarded in the 25th minute when Hamady Diop served a ball from the left wing that Luc Granitur ran on to near the 6 and one-touched past the keeper.

"Hamady couldn't have placed it any better," Granitur said. "I had the easy part."

"It was great seeing it hit the back of the net," added Granitur, a native of Vero Beach, Fla.

Chances for Jacuipense were few and far between on SIMA keeper Marc Kouadio, who played for Canada in the U17 World Cup. Meanwhile, SIMA Gold kept up the pressure on their Brazilian rivals as Macoumba Ba, J.T. Kamara, Omar Ciss and Ousmane Sylla, among others, all had scoring chances.

The second half proved a more even match as Jacuipense was able to pressure SIMA Gold, which was missing in the first half. Once the final whistle sounded, the camaraderie was evident. Several players hugged it out with the Jacuipense players.

"It was fun seeing old friends and playing against my old club," Rodrigues said. He added that he hasn't seen those players since leaving Brazil in July of 2018.

Nasciemento went back for a visit last summer, but said seeing his former teammates and coaches was very motivating. He was happy for them to see where he's at now.

"They helped me a lot," Nasciemento said. "Now, [Montverde Academy] is helping me with my dream -- a chance to play college or pro."

As Rodrigues and Nasciemento spoke, a steady stream of Jacuipense players walked past, slapping hands, poking each other in the back and generally having a good time.

Following the match, the teams shared a meal to further reinforce the relationship that has formed between the clubs.

In the Super Group opener Wednesday, FC Dallas struck first when Benjamin Redzic scored in the 15th minute, going far post from the left side. Valencia answered in the 70th minute. Lorenzo Sanchez Martinez got behind the FC Dallas defense on a counter and was in all alone on keeper Seth Wilson. Wilson made a spectacular save on Martinez's right-footed effort, but the ball bounced right back to Martinez who didn't miss on his second chance. His soft touch got just over the line as an FC Dallas defender was making a diving attempt to keep the ball out of the net.

FC Dallas had two chances to win in the closing minutes. First, a shot by Gibran Rayo clanged off the crossbar. Not long after, Valencia keeper Javier Ramirez Santamaria, who appeared to be beat on a play, somehow swatted the ball out of danger.

"Much better than last night," FC Dallas coach Chuy Vera said. "[Last night] SIMA dominated us. We've been on holiday break and we weren't ready. Today, it was a different game. The guys felt good and played much better. We deserved much better (than a tie)."

In Tuesday's match, Ousmane Sylla, Luca Dourado and Diop scored for SIMA Gold. FC Dallas got a goal late in the match.

GOAL! Luc Granitur scores the first goal of the match against Brazil’s Jacuipense!

Currently SIMA Gold is up 1-0 with 15 min left in the first half. #LaFamiliaSIMA#MAST2020 pic.twitter.com/Lc6sZhnv5S

GK Marc Kouadio, SIMA Gold: Kouadio makes the list thanks to his feet. As a keeper, he handled the limited chances thrown his way. But his real value was stepping up and playing balls with his feet that had been played back to him. He almost served as an extra defender, allowing SIMA to keep numbers forward and not have to drop a midfielder back to help build the attack.

F/M Gibran Rayo, FC Dallas: Rayo ripped a shot that clanged off the crossbar in the 76th minute. Throughout the match Rayo was dangerous with the ball.

D Shawn Smart, SIMA Gold: A 2022 prospect playing on the field with high-level 2020 graduates. Smart started the match and more than held his own.

M Ousmane Sylla, SIMA Gold: Sylla was an important link in SIMA’s attack. He provided the balance SIMA needed to control long stretches of the match.

M Tanner Tessmann, FC Dallas: Listed as a center mid, Tessmann was more of a defensive mid much of the match, but was very active. The Clemson commit connected key passes, cleaned up a lot of issues defensively and was a team leader.