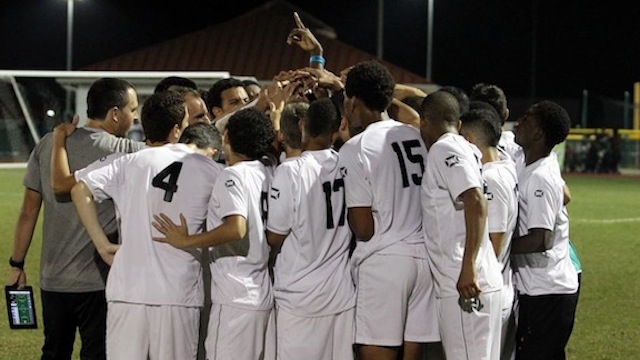 In 2010, Mike Potempa jolted a sleeping giant to life.

After several years in the college coaching world at Clemson, Potempa accepted the boys soccer head coaching gig at Orlando-area Montverde Academy in time for the 2010-2011 season. A step down? Not how Potempa saw it. With a unique niche in the high school world, some of the best facilities of its kind in the country and a roster brimming with international talent, Potempa realized the program's potential the second he first stepped foot onto the school's lush grounds.

In Potempa's first year, Montverde went 26-0-1, undefeated for the first time in the program's 81-year history. That season produced a POWERADE FAB 50 winter national title, the first of three consecutive national crowns after three consecutive unbeaten seasons. The scenes from Potempa's first major accomplishment at the school were hard to forget. An ESPN SportsCenter crew captured the team's decorated roster streaming into a packed gym, smartly dressed in deep purple sweater vests, accepting a crystal bowl trophy as the winter boys program in the nation.

That season kick started what's arguably become the nation's most prolific high school boys team over the past half-decade. As Montverde approaches its fourth season under Potempa's watch this winter, it boasts a 74-0-6 record since 2010. At 80 games, that's the longest high school unbeaten streak in the nation. While Montverde operates as in independent school in the state of Florida, which disqualifies it from winning any kind of formal state title, the Eagles have faced a handful of the state's best soccer programs and has yet to falter under Potempa. He was a member of the U.S. U17, U19 and U20 setups and was drafted by the L.A. Galaxy in 2001 before injuries scuttled his career. That turned Potempa onto coaching, where he's flourished in the high school ranks.

Soccer is an international game, culling players and coaches from all walks into its swirling universe. And as a boarding school that accepts students from somewhere in the vicinity of 50 countries, Montverde is set up to take advantage of that fact like few other schools in the country. While tuition for boarders is steep - it costs $42,000 to board for the 2013-14 school year - approximately 30 percent of the student body receives some form of financial aid, Potempa said. Applicants apply to a third party aid service to determine need, and students are doled out funds until the aid budget runs dry.

Last season was admittedly Potempa's best at Montverde. The Eagles finished 25-0-1 and went wire-to-wire as the NSCAA's top overall winter boys soccer team in the nation. The streak was in serious jeopardy once, against Arizona power Brophy Prep in Montverde's invitational tournament in January. Brophy grabbed a 1-0 lead only to watch Montverde storm back like a practiced professional for a 3-1 win. The streak was safe, and it was hardly threatened again in 2013.

Indeed, Montverde hasn't clawed its way to the summit by ducking big programs. Last season, the Eagles hosted their second Montverde Academy Soccer Tournament and reeled in big fish like winter No. 6 Coppell (Texas) in addition to Brophy. It's a three-day, eight-team tournament that can earnestly call itself one of the best high school invitationals anywhere in the country. In addition to top teams, it drew 44 coaches last year interested in recruiting from a pool of the country's best high school players.

So while Potempa can appreciate the streak the Eagles have put together, he admits results ultimately take a backseat to development. And Montverde has been arguably the country's best high school program in this category over the past three years.

"At the end of the day, that's what I'm really about is the development side and helping kids get to the next level," Potempa said.

In a world dominated by elite club culture, specifically the Development Academy on the boys side, Montverde offers something even the best club programs in the country can't. By opening its doors to international students in search of both an education and an elite training atmosphere, Montverde has become the destination of choice for enterprising international high school-aged players with bags of talent. Since Potempa arrived, 48 graduates of the high school program have found a scholarship for the next level. The levels of those college programs continue to rise in prominence.

By signing a pro contract, Vujanovic joined Senegal native Oumar Diakhite as Potempa's second player to do so in three years. Diakhite graduated from Montverde in 2012 and spent less than a month with Orlando City's senior team before signing with Olhanense in the Portuguese first division in August. Despite playing just one match with Orlando City's senior team, Diakhite went the full 90 in four of Olhanense's matches in September as a center back.

With so many talented players shuffling off to successful careers in college, adding professional players to the mix has only made Montverde a more enticing option for players looking for a holistic development experience. Earlier this summer, Montverde announced it would open an academy this fall that operated separately from the high school team. Its technical advisor? Frank Rijkaard, former coach at Barcelona and most recently the head coach of the Saudi Arabian national team.

As far as high schools are concerned, Montverde is simply a world unto itself.

"Some of these other kids that have gone on to be successful in the college game, I think now they're grabbing the attention of college coaches to say, wait a minute, something is going on down there to where we can get kids that can step in right away and play," Potempa said. "That's eventually my goal, is to develop them academically, socially and athletically to where they can step into a college environment and they're ready."

When Potempa took over, he received some pushback from players not used to such an intensive day-in, day-out training style. Potempa is relentless with his approach to the game, asking his players to live soccer on a daily basis and pushing them hard through technical and tactical training drills. With his press style that draws a high line and continual insistence that his players live on the attack, it took some effort to coerce his roster to buy in.

"It's gotten better and better as each year goes by," Potempa said. "I think when I first got here people really didn't understand the approach I was taking because of the intensity and the seriousness with which I approached it. As they started to see the approach and where the kids were going afterwards, it started to become more clear on campus to the seriousness and the level of the program by our college commitments."

Montverde will likely open the 2013-14 season this winter as the NSCAA No. 1, yet again burdened with the heavy yoke of expectation. It helps that Potempa brings back 11 players with extensive starting experience, including returning leading scorer Diego Campos, one of the most prized high school recruits in the country after he bagged 24 goals and five assists last year.

Still, Potempa will continue to judge the progress of his program by the measuring stick of the fruit it cultivates rather than the results it produces. A verdict on how that approach fits into the grand scheme of American soccer may have to wait. Potempa is just fine producing some of the best next-level talent in the nation in the interim.

"Once you start reaching success I think there's always pressure to kind of perform at that level," Potempa said. "But I think from my perspective as a coach, I kind of take that out of it. This year is totally new. A totally new team. I try to erase what's gone on in the past and don't make much of it. And when you don't make much of it as a coach, the players won't either."