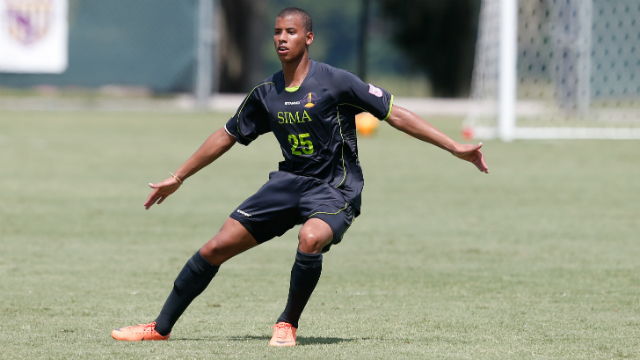 Matheus Silva came to the U.S. to fulfill his mother’s academic wishes. Two-and-a-half years later, the 18-year-old is living his own dream as a member of the San Jose Earthquakes.

Silva’s story is far from the oft-told “child prodigy making it big” tale. In fact, had it not been for a confluence of events, the 6-foot-2, 195-pound defensive midfielder very likely would have been a case of potential gone unrealized.

In a matter of months, Silva went from virtual high school unknown to professional player. In January, he played for Montverde Academy (Montverde, Fla.) in the Montverde Academy Soccer Tournament, helping his high school team to a third straight SIMA FAB 50 national title in front of maybe 500 fans. In July, he was on the field for the San Jose Earthquakes, facing Manchester United before 20,000 spectators. 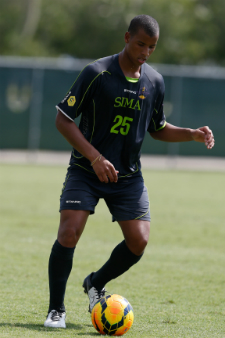 Silva in action for Montverde

“It’s a [dream] come true for me,” Silva said of playing in MLS.

“Manchester United is one of the best clubs in the world, and it was [an] amazing playing experience to play against great players with big careers in Europe in front of so many people,” Silva said through email correspondence. “It was an experience I'll never forget.”

Silva, from San Paulo, Brazil, arrived at Montverde Academy in the summer of 2013 as a non-English-speaking summer school student. Montverde, a boarding school, is well known in parts of Brazil for its educational opportunities provided to Brazilians.

“It was his mom’s dream for him to come to the U.S. and get his high school degree,” said Montverde Academy soccer coach Mike Potempa. “I met him in summer school, and I never knew him — or saw him — before he arrived for summer school.”

Silva played futsal in Brazil with great success, but wanted to be a professional player and knew futsal was not the way to achieve that goal, Potempa said. He wanted to play high school soccer at Montverde, but was unsure of his ability.

But just when it seemed Silva was making progress as a high school junior in 2013-14, he started “The Process,” as Potempa said, referring to a routine series of events he has witnessed over and over as a coach of a boarding school program with several international student-athletes. “It’s a big struggle. There’s a lot of adversity moving to a different country, learning a different language. He didn’t know English and he was missing Brazil and his family. He came to my office one day and said, ‘This (being in the U.S.) is my mom’s dream — not mine.’”

Potempa encouraged Silva to stay with the program. During the spring of 2014, the boys players from the S.I.M.A program made a trip to Holland to play against the likes of SC Heerenveen Under-18s, Ajax Under-18s and Go Ahead Eagles first team.

“He wasn’t usually a starting member of our first team at the time,” Potempa said of Silva. Potempa then inserted him as a center back against Go Ahead Eagles. “I had never seen him play outdoor like that. He showed real skill, confidence and strength against first-team pros at just 17 years old and I thought, ‘There’s something to this kid.’”

Upon returning to Florida, Potempa and Silva had another meeting just before summer break going into his senior year.

"I asked him, 'What is your dream?' and he said, 'It is my mom's dream for me to finish my education and it is my dream to be a pro,'" Potempa recalled. "I told him, 'Then you have to stay here, continue your studies so you can graduate on time, and totally dedicate yourself to training throughout the summer months (instead of returning to Brazil).'"

Silva remained at Montverde during the summer of 2014, taking additional summer classes while training in the SIMA program. It was during this time, Silva “turned the corner,” Potempa said, and opportunities quickly started to fall into place.

“The first order, when we returned to school in the fall, was for him to have options when he graduated,” Potempa said. Silva received more than 20 scholarship offers before verbally committing to Saint Louis University with the understanding he would be happy to represent SLU if a professional opportunity did not come along.

During the Disney Showcase at the ESPN Wide World of Sports Complex in December, professional scouts took an interest in the lanky defensive mid. He attended the New York City FC combine in January. He received strong reviews, but he did not fit the needs of an expansion team. Then Silva went to Spain for a trial with a club. Again there were positive reviews, but passport and visa issues halted any momentum. He then trained with the San Jose Earthquakes and appeared in two scrimmage matches with the first team, and management liked what they saw. The Earthquakes claimed him off waivers July 14, granting him one of the team’s international spots on the roster.

He is the fourth player to sign a professional contract straight out of Montverde Academy, joining Oumar Diakhite (S.C. Olhanense/Estoril Praia in Portugal), Luka Vujanovic (FK Lovcen in Montenegro) and Pape Gassama (US Creteil Lusitanos in France). Silva is the first to join MLS.

“Talk about a perfect storm,” Potempa said. “He helped a high school team to two national championships, got a full ride to Saint Louis, learned to speak English, graduated high school and got to turn pro in the MLS.”

During Silva’s first week with San Jose, he came on as a sub in both of the team’s exhibition matches with Club America and Manchester United. He has yet to appear in an MLS match.

Silva now is going through another adjustment period — being an 18-year-old living in San Jose. The club is tending to his basic needs during this transition.

“[San Jose] has a great weather, the brand new stadium, the facilities, and the most important [thing is] the team they have helped me to adapt. The coaches have been great, and I'm really enjoying my first few months with the team.”

“He's a hard worker with a strong, athletic body who prepared himself physically and mentally,” Potempa said of Silva. “He’s a true developmental story. He gave up everything, and now he’s won the big one.”