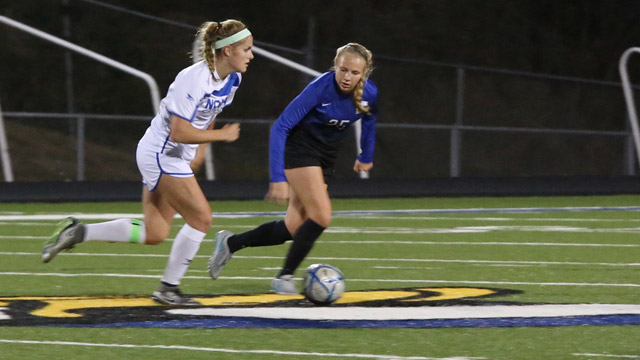 “I was told I was driving a Cadillac, so enjoy the ride,” he said.

It did not take long for the reigning SIMA FAB 50 national champions and current No. 2-ranked team to rev up the engine. Italia Bradley drew a penalty kick 24 seconds into the match and senior standout Sarah Houchen converted the chance to jumpstart the Cowgirls’ 3-0 win over Bishop Lynch (Dallas, Texas).

“I really wasn’t nervous,” Dunlevy said of replacing longtime coach Chris Stricker, who retired just minutes after the 2015 won a state title to secure an undefeated season and national No. 1 ranking. “I have trust in the girls, and I knew they would take care of business. That [early penalty kick] helped everybody’s confidence. That was a great way to start the game, a great way to start the year.”

“We came out hard, finished that first chance and that really set the tone,” said Houchen, an Auburn commit.

Although Stricker retired and state player of the year Sarah King graduated from last year’s squad, Dunlevy certainly was not left empty handed. Seven of the team’s starters are committed to NCAA Division I programs, which is about average for the Texas powerhouse programs.

WELCOME TO THE LONE STAR STATE: Montverde Academy (Montverde, Fla.) and Harvard-Westlake (Studio City, Calif.) made their NEPS debut Thursday with mixed results. Montverde Academy’s Nathalia Da Silva showed that she’s probably the nation’s top uncommitted senior with a two-goal performance in a 3-1 win over Vandegrift (Austin, Texas). Harvard-Westlake, meanwhile, came out on the short end of a 2-1 decision to Hebron (Hebron, Texas.).

IN FOR THE LONG HAUL: Plano West (Plano, Texas) had the nightcap that turned into a late-night affair at Nolan Catholic. The Wolves played the 7 p.m. match against co-host Nolan Catholic (Fort Worth, Texas), which ended shortly before 9 p.m. Then, the bus broke down before the team could leave the facility. Members of the Plano West team finally left Nolan Catholic just after 11 p.m.

SHUTOUT CITY: There were 14 shutouts in 16 matches at NEPS on Thursday, with three contests ending in scoreless ties -- accounting for six of the clean sheets. Take away the two 6-0 contests, the average score of a NEPS match Thursday was 1.8-0.2.

WATCHING EYES: Although most high school contests don’t register on recruiter’s radars, NEPS is a bit different. With the high number of perennial powers and several programs with four or more NCAA Division I-bound players in starting 11s, college coaches do flock to this event. Several Big 12 and SEC programs will be present at the event.

OVER THE MOONS: Marcus (Flower Mound, Texas) sisters Jordan and Taylor Moon combined for three goals and two assists in the team’s 6-0 victory over Round Rock (Round Rock, Texas).