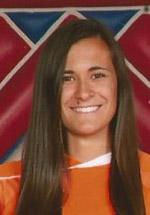 Norris returned to the field earlier this spring from an injury to become a key ingredient in the Eagles’ success. The senior defender has been a massive force for the Chapin backfield. Since his return, the team has won five games in a row and given up just three goals.

Following a successful interscholastic career, Norris will continue his playing career with Wofford College(m) (S.C.) in the fall.

Comba is described as a “consistent and relentless” player all season. The senior goalkeeper amassed 32 saves and allowed just two goals in the past three contests. A recent 1-0 win was against the sixth-ranked team in the state.

The four-year letter winner will continue her playing career in the fall at Wayne State (Neb.).

The NSCAA High School Player of the Week program is designed to highlight the future stars of the game Anyone can nominate a player, however only players whose coach is a current NSCAA member are eligible for selection. Honorees will be announced on Wednesdays.

The next submission deadline is Monday, May 13, followed by the May 15, announcement.