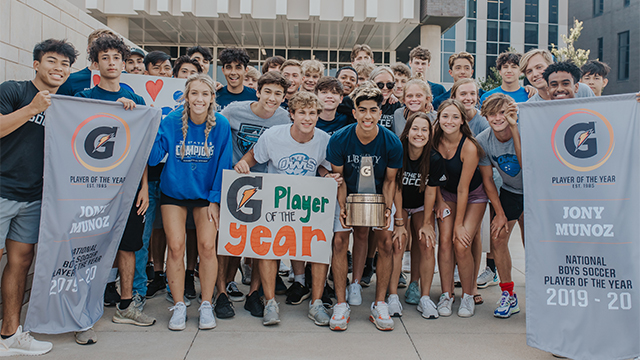 Similar to other recent Gatorade National Player of the Year winners, Jony Munoz’s journey to this year’s honor began with a decision to leave a Development Academy side.

In the summer before his junior year at Olathe West, Munoz decided to leave the Sporting KC Academy and play high school soccer for his final two seasons.

Munoz, who was born and raised in a Christian household, said it was a “God-led decision” to leave the DA and play high school soccer.

“I loved Sporting, I grew up, they’re like a family – Swope [Park], and just wearing the jersey, it was home to me,” Munoz told TopDrawerSoccer in a phone interview. “It was very hard, and some of the people around me thought I was crazy. It was a scary decision, but I’ve always grown up in the faith and my parents have instilled that in me for sure.”

That step of faith was rewarded, both on and off the field, during the 2019 fall high school season. He led Olathe to a 20-1 record, and a Class 6A State Championship, the first state title in a team sport in the school’s short history. Munoz scored 36 goals and setup 19 more during his senior year. An electrifying talent on the field, Munoz’s ability to conjure goals from just about anywhere on the field made him a must-watch player for his high school squad.

It was his all-around impact on the team that laid the groundwork for the national honors.

"Johny's impact goes far beyond the soccer field,” Olathe West head coach Matt Trumpp told TopDrawerSoccer. “He's 100 percent into his faith, his community and his friends. He gave up a chance to sign a professional contract to play for his high school in an area where that would be discouraged.

"I have freshman and sophomores looking up to him. He started a counter culture -- he made it cool to play high school soccer.”

Last Wednesday, Munoz was honored by classmates, teammates and friends at Olathe West, where he was celebrated and handed the trophy.

“I was so shocked, the parade of cars, seeing all my family, friends, people who have known me since I was a baby, my team,” he said. “To see all the cameras, all the news, it was crazy.”

There was another plus to Munoz’s decision to step away from the SKC Academy, allowing him to lead more of a balanced life.

“I left and I got to spend a lot more time with my family, be more involved with my church and my youth and the worship [band] at my church,” he said. “Just do more a lot more things, build more relationships with friends, be more of a normal kid.”

Up next for Munoz is college soccer. Signed on to play at Liberty in the Atlantic Sun Conference, the combination of the school’s faith-based background and a tie with head coach Kelly Findley brought him to the program.

Before taking the job at LU, Findley worked for Sporting KC Academy as a coach. Munoz and one of Findley’s sons Gabriel were teammates in the academy, and would carpool to practices together. The two became friends, and after Kelly took over at the A-Sun program, he reached out to Munoz about coming to Lynchburg. Munoz called the decision a “no-brainer.” Findley's son Gabe will be teammates with Munoz as well.

On July 8, he'll hop in a car with his family and make the roughly 1,000-mile drive to move into school – pandemic-permitting.

“I’m excited for the challenge,” Munoz said. “I got to play DA, I got to play high school, I’ve achieved a lot in high school so now I’m hungry for more. I want to achieve the most I can in college and try to be a key player at LU – just try to help my team win.”

Even though he made the decision to step off the pro pathway, he still has high ambitions on the field. He’s hopeful of turning pro one day, but isn’t getting carried away.