Nicholas Taitague, the No. 1 player from the class of 2017, has enjoyed a pretty successful 2013. A fixture with the 1999 age group in the youth national team, he’s made the jump up to the U17 Men’s National Team on a couple of occasions. 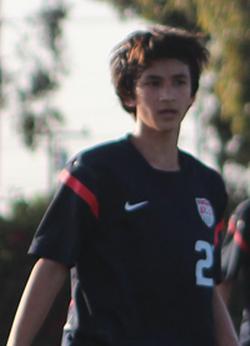 With the success at the youth national team level, the attention toward the Virginia teenager has only grown.

Manchester United was the most eager side to get a look at Taitague in their academy, and invited him for a weeklong stint in October. Following the completion of his training with the English Premier League giants, Taitague flew out to California to take part in the U15 BNT camp at the StubHub Center.

The busy month was well worth it for talented player from Virginia.

“A little bit chaotic, but it was a good week and good experience – all soccer,” Taitague told TopDrawerSoccer.com about the travel and schedule.

He added that it was a more intense environment at the Manchester United training sessions compared to the youth national team.

“It is their life every day – it is their work,” Taitague said. “It was a great experience overall. [It’s something] I’d like in the future.”

For now, Taitague remains one of the key pieces with the U15 BNT and proved it over the past week with his performances in the two scrimmages – a win against Chivas USA U16 and a loss against Real Salt Lake-Arizona.

“It was a good week,” Taitague said. “I thought we played well against Chivas USA, but could’ve done better today [against RSL-AZ].”

U17 MNT invited to train in Germany

Devin Vega, a member of the U.S. U17 Men’s National Team Residency Program in Bradenton, Fla., was recently invited to go on trial with Eintracht Braunschweig, a Bundesliga side.

Vega is a center midfielder from Texas who did exceptionally well during the final camp for the 1998 age group in Carson, Calif. in late July prior to the Residency Program’s first semester for this cycle.

This isn’t the first international interest in the San Antonio Scorpions Youth Soccer Academy player, as he trained with Flamengo in Brazil in 2011.

Pacesetter SC U17 forward Camden Buescher was invited for a trial with Everton’s Academy in late November. Everton scout Jim Barron spotted Buescher over the summer at a camp.

The St. John’s Jesuit junior will be with Everton for 10 days during the Thanksgiving break.