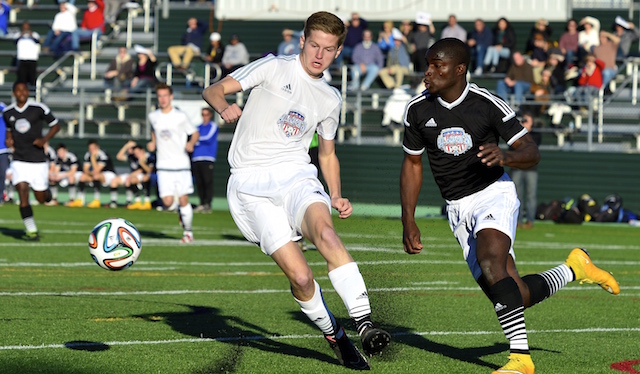 The girls match was the national debut for Stanford commit Averie Collins, who used her size, strength and skill to help power the West to a 5-0 victory. Collins, from Bozeman (Bozeman, Mont.), scored one goal on a solidly-struck left-footed shot and helped set up another.

“I was extremely excited to play in this game and test where I stand,” said Collins, who added that she had never been east of Minnesota. “It’s hard to be from Montana and get [recognized].”

Utah commit Hailey Skolmoski of Riverton (Riverton, Utah) and Gonzaga commit Maddie Kincaid of Portland Jesuit (Portland, Ore.) staked the West to a 2-0 first-half lead. Kincaid scored on a penalty kick. Collins’ goal made it 3-0 early in the second half before Oregon commit Kyra Fawcett of Woods Cross (Woods Cross, Utah) and Indiana commit Caroline Dreher of Holy Name (Parma Heights, Ohio) capped the scoring. Penn commit Kiera Towell of Edmonds-Woodway (Edmonds, Wash.) was in goal the entire match for the West to earn the shutout.

While the girls match lacked drama, the boys match literally went down to the final minute before the West held on to a 2-1 victory.

Uncommitted Edward Opoku of Millbrook School (Millbrok, N.Y.), playing for the West, delivered the match-winning goal after using his speed to create just enough separation between him and defender A. Mickey Watson of South Kent School (South Kent, Conn.) to get off a shot.

The East was seemingly in command the entire first half and had a 1-0 lead on a goal by Michigan commit Francis Atuahene of Hotchkiss School (Lakeville, Conn.). In the closing seconds of the first half, Michigan’s Mr. Soccer, Michigan State commit DeJuan Jones of East Lansing (East Lansing, Mich.) scored to even the contest at 1.

The West had the better of the play the entire second half until the East put its strongest 11 on the field for one last push in the closing 10 minutes. The East created several chances, but nothing got past West keeper and Army commit Luc Barbe of Jesuit (Carmichael, Calif.), who posted a clen sheet for the second 40 minutes and shared the win with fellow keeper Wes Bergevin of Hinsdale Central (Hinsdale, Ill.).

Opoku and Washington commit Corban Anderson of Granite Bay (Granite Bay, Calif.) were named the West co-MVPs, while Atuahene was the East MVP.

NOTES: Several hundred spectators attended this year's All-American games, marking the first time these contests have been played back-to-back at the same venue. The West holds a 3-1 series lead in boys competition, while the East and West have split the two girls meetings.

West goalkeeper Kelsey Dossey had been invited to youth national team training and could not play in Saturday's contest. Still, the Missouri commit from Avon (Avon, Ind.) attended the contest to cheer on her West teammates.