Top players from the Academy Showcase 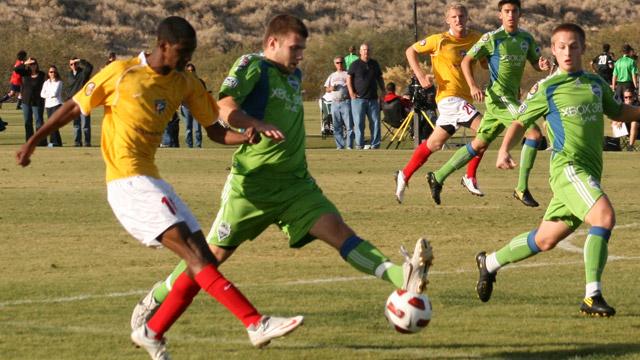 We’re continuing our look back at the Development Academy Winter Showcase. We’ve already given you the top teams from the event, and today we take a look at some of the top performing players.

In no particular order:

James Pyle
Andre Simmond, Seacoast United – Really brings a strong work rate to every match. Simmond covers a lot of ground as a holding midfielder and plays with good intensity and passion.

Jack McBean, LA Galaxy – Was one of the top players in the U16 Select game and led his squad to three wins without a tie or defeat.

Christian Carillo, Chivas USA – Was dangerous throughout the showcase. He netted four goals in the three games.

Diego Fagundez, New England Revolution – A U.S. National Team pool player, this small but quick attacker is gifted with the ball at his feet. Scored three goals over the competition.

Tarek Beckles, Albertson SC – A serious ball-winner who will out compete players who aren’t prepared.

Aaron Dennis, Cosmos Academy East – Great size and smooth as ever with the ball. Dennis is the team’s leading striker, and excels at getting in good positions off the ball or making things happen on his own.

Eriq Zavaleta, Real Salt Lake AZ –Tall and strong defender who helps to solidify the backline for this group.

Reed McKenna
Reed McKenna, San Diego Surf – He’s always been fast and deadly, but he showed off a toughness and physicality that could take him to another level. Teammates Zach DeVille and Keegan Smith also played well alongside him.

Javan Torre, Pateadores – Love his leadership and influence on his backline. A strong competitor.

Michael Gamble, Baltimore Bays Chelsea – He’s only one of the best players in the country. He showed well in the U16 Academy Select game though he was starring with his U18 team.

Villyan Bijev, Cal Odyssey – Produced the performance of the showcase when he went bananas during the U18 Select game. Headed to Washington next year, he’s got great height and instincts.

Dzenan Catic
Jordan McCrary, Concorde Fire – Has that rare combination of technical proficiency and athleticism. He was, at times, a magician in tight space.

Dzenan Catic, Derby County – Very technical and talented midfielder. He has great talent around him and knows how to leverage it.

Khai Celestin, Crew Soccer Academy – Had a coming out party against the Baltimore Bays. Lots of potential for this kid.

Baboucarr Jammeh, Colorado Rush AJ Auxerre – A native of Gambia, he scored in every match to put his stamp on the week.