The Region I ’93 ODP team recently returned from a 16-day trip to Russia.

But the trip ended up meaning so much more than anything about what happened on the field.
Competing in an international tournament against youth national teams from Russia, Japan and North Korea, the team stayed alongside their opponents at the same hotel in the Black Sea resort town of Sochi.

Kelsey McQuaid, a player on the trip who now plays with United FA in Georgia, said the team had a unique chance to interact with their opponents. 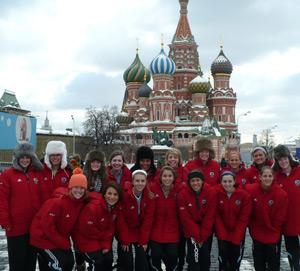 Region I ODP players in Russia.
“I’ve gone on other trips with Region I, but I thought that was the one where I gained the most experience. We were at the hotel there with all the other teams. We got a good feel for what the players from the other countries are like. We got to interact with everyone.”

An especially poignant moment came when the U.S. girls learned that the reason members of the Japanese team had been visibly upset one morning is that the devastating earthquake and tsunami had hit their island earlier that day. The team decided to purchase some flowers for their counterparts and presented them as a gift.

“They didn’t know much English and we didn’t know Japanese, but they were very grateful,” McQuaid said. “A lot of them were crying and everything.”

“It was so touching. Our kids were phenomenal the way they went out of their way to spend time with the Japanese players,” Daly said. “Some of the other countries were not as forthcoming, but our kids showed an exercise in care and humanity and it was very touching.  I know their coaches were almost in tears when I spoke to them on the last night we were there. He told us through an interpreter that they were so appreciative of what our kids did.”

Assistant coach Darren Williams, who also works with New England FC and WPS side Boston Breakers, added that from that point on, the two squads of players served as unofficial cheering sections for one another.

Williams added that the interaction with the North Korea side was noticeably different.

“They didn’t talk to us. They wouldn’t even make eye contact with us,” he said. “There was a gentleman there with them who was definitely out of place, like a security person or something to make sure none of the girls defected or even talked to anyone. They had all the televisions taken out of their rooms.”

Region I defender Casey Morrison, who was named top defender of the tournament for her play in the back line, said the trip also brought her team members closer with one another. 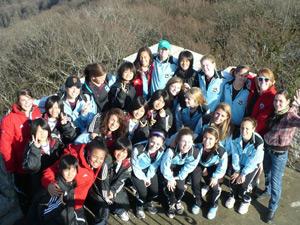 Region I ODP team with the Japanese team.
“I think especially with how much longer the trip was, that happened. “Morrison said. “I’ve been on many trips and this was my favorite. We really bonded, especially knowing this was the last one and that we might not see each other again. There were some times where you got tired of the food and we were missing our families, but mostly we just really enjoyed staying with each other.”

Daly and Williams agreed that the team learned a great deal on the field as well.

“The benefits were almost immeasurable,” Daly said. “Especially playing against the Asian teams, their technical ability is so good. It was a good lesson as well for our players to play against kids who can move the ball so quickly. The teams from Russia and Estonia were savvy players. They grow up in a soccer culture, which we’re still trying to develop. The Europeans have televised soccer going all the time, so those aspects were tremendous for our kids to experience.”

“You find things in the world game that you don’t necessarily see in the U.S.,” he said. “There’s a rhythm of play. Here we want to do everything at 100 mph -  as fast as we can - and we don’t have much patience. The teams we found there were extremely patient. Their defending was organized and they would wait until we made a mistake, or with the Asian teams they would knock the ball around, and just probe until they found a way they could exploit us.”