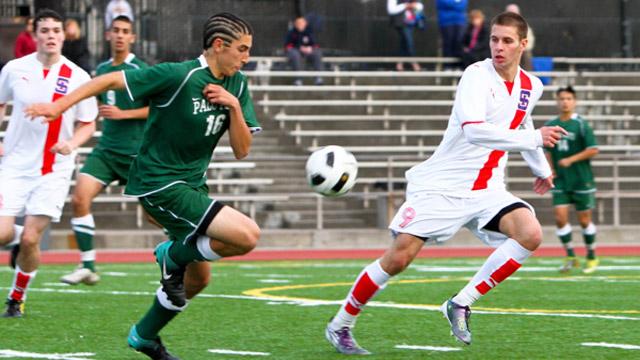 We’re bouncing around from the Pac-10 to the Ivy League in today’s Signing Day analysis. 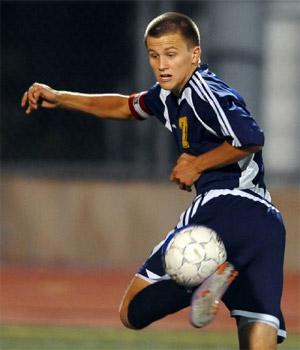 Zach Batteer. Photo by Christopher Horner, Tribune-Review
Stanford
Signing: Zach Batteer (Beadling FC), Jimmy Callinan (Santa Clara Sporting), Grant Grafentin (Andromeda SC), Felipe Noguerol (Weston FC), Eric Verso (L.A. Galaxy)
Skinny: Another year, another quality class for Stanford. The Cardinal is getting one of the top scorers in the country in Noguerol. The Weston FC forward is a fearless striker who capitalizes on a high percentage of his chances and will supply the program with instant firepower. Batteer, our No. 26 ranked player in the Top 100, is an intelligent player with good size and solid skills. Batteer has a knack for getting in the right positions on the field. Callinan is an outstanding athlete with good speed – the reason he’s No. 58 on our Top 100 list. Verso and Grafentin are both Development Academy standouts who round out this superb group.

UAB
Signing: Stewart Abrahart (Alpharetta Ambush), Javier Alvial (Chile), Karl Chester (Alpharetta Ambush), Darion Copeland (Alpharetta Ambush), Jack Falle (Gwinnett Soccer Association), Cole Iverson (Birmingham United), Ian Michalak (Tennessee Rush), Arturo Rodriguez (Santiago, Chile), Chase Wickham (GSA Phoenix)
Skinny: Very interesting mix of players for the Blazers. The program has been known to bring on an international standout or two over the last couple years, and UAB may have repeat success with Rodriguez and Alvial who are former teammates from Chile. Falle is one of the best goalkeepers in the country and comes in at No. 43 in our Top 100. At 6-foot-4, Falle is a big presence and is also rangy. Iverson is ranked No. 4 in our South Region – he’s strong on the ball and a very capable striker.

“(Byrd and Romero) have played in tandem for the USYSA Region II ODP midfield, and should bring a great connection for us in the midfield as freshmen,” said Evansville coach Mike Jacobs.

Princeton
Signing: Julian Griggs (DC United), Myles McGinley (DC United), Andrew Mills (California Development Academy), Cameron Porter (Cincinnati United Premier), Joe Saitta (FC Copa Forza), Samuel Suskind (Marin FC), Alex Wetterman (Sockers FC)
Skinny: Following a perfect season in Ivy League play last year, the Tigers are as attractive a program as ever. Griggs, a Top 100 prospect, is one of many talented players who can’t reach the campus fast enough. He is a fast attacking player with good ball striking ability. McGinley, is the No. 8 ranked player in the Mid Atlantic Region and a teammate of Griggs’. McGinley is a starting defender who is capable of stepping in sooner than later. Millis is the captain of a very strong CDA squad while Porter brings the ability to make things happen offensively.
Related: Players To Watch,