We’ve saved the best for last in our look at the Region III ODP girls trips abroad as the 1994 girls dominated in their recent trip overseas to Spain. Coached by Brian Moore of Atlanta-area club Concorde Fire, the girls went 5-0 on their tour of Barcelona.

The first game was against Las Planas, a local team from Catalonia, and the girls passed that test with a 5-1 victory. Things started out slow as the ‘94’s struggled to find their legs after the long trip and they found themselves down 1-0 but quickly turned around the deficit to lead 2-1 at halftime. According to Moore, the girls found the right combinations and got used to playing on the turf as the game wore down, scoring three goals in the last ten minutes to win 5-1. The strong second half performances was a storyline throughout the week.

“Over the course of the week we had such a deep team that every game we dominated in the second half,” said Moore. “Whether it was stamina or having a deep bench, they played great.” 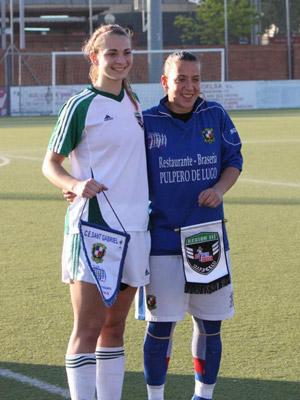 Anna McClung (left)
In their next two games, the girls would roll over local teams by a combined score of 11-1 before playing their toughest games of the trip against Espanyol and Montpellier. Facing off against Espanyol, the traditional weaker sister to giants FC Barcelona, the girls faced their toughest test according to coach Moore. In a closely fought game, the ’94 girls took the lead just before the half on an Anna McClung free kick goal. The second half was a bit of a disappointment for Moore as the Spaniards took out most of their best players in preparation for their weekend league game, leaving the Americans with a significantly weakened opponent that they rolled over.

Against French side Montpellier, the chances of finishing the week perfectly looked slim as they found themselves down 2-0 after 17 minutes. From there, however, the girls responded brilliantly scoring the last four goals of the game to win 4-2 and complete the trip 5-0.

At the heart of the success for the ‘94’s was forward Anna McClung, a Florida State commitment, who scored in every game on the trip and eight goals overall. Moore was pleased with more than just her goal scoring, however, as her overall game has improved vastly.

“I felt like there were a lot of areas she needed to fine tune to improve the quality of her runs and her combination play, but she’s made vast strides and she was playing with a ton of confidence in those areas by the time we got to Barcelona,” Moore said of the U18 GNT player. “She was very clean with her touch, her combination play was very good and her runs created a ton of opportunities.”

For Moore, as with all the ODP coaches we talked to, the most pleasing part of the trip was the chance to play against completely different styles and incorporate the positive aspects of those into their own game. It was the methodical, possession game of the Europeans that was most appealing to him.

“As I told the players over the course of the week, what I felt like our culture doesn’t help us with is that every game that a lot of American clubs play is a 90 minute game like there’s only 90 seconds left. There’s no patience, there’s no taking care of the ball or making any changes to control the tempo of the match,” he said. “It’s just one tempo only and we learned a bunch from the Spaniards in that regard because a lot of those kids were much more skillful and tactically much more aware than we were but our physicality took over.”

Moore continued to say that irrespective of the results, it was the style of play that the Americans adapted to throughout the week that was the most important thing to take from the trip.

“I told them the times that we dominated them physically but didn’t pick up the little things that we could learn from them I was disappointed,” Moore said. However through the course of the week and by the end of the week we were much more comfortable taking our time and connecting more passes. Not just dumping and chasing, we did a good job of learning to take care of the ball.”