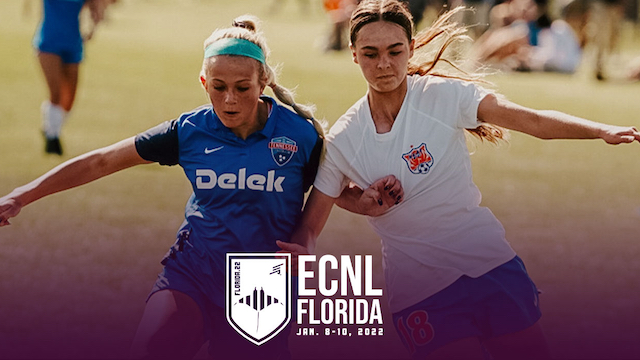 Tied 1-1 with North Carolina Courage, and just seconds left in the contest, DKSC drew a penalty kick after searching for the go-ahead tally. As soon as the whistle blew, Love grabbed the ball and put it on the spot. DKSC’s leading scorer knew she was going to take the shot.

With more than 50 college coaches in the stands and many more spectators, Love took a deep breath and then buried a shot into the bottom right corner to give the DKSC U16 team the 2-1 victory.

“Allie is someone we can rely on,” said DKSC coach Adam Flynn. “She showed bravery, she picked up that ball and showed absolute confidence and great technique to put it in the back of the net. The pressure on her was pretty immense, and to her credit, she took a deep breath and slapped it home.”

The Courage jumped out to a 1-0 lead early in the first half when they earned themselves a penalty kick. Isabella Ayscue took the shot for the Courage and beat the DKSC goalkeeper to grab the 1-0 advantage.

But just seven minutes later, DKSC responded. Following North Carolina’s PK, DKSC pressured the Courage’s backline, eventually earning a corner kick. The service went into the box, where the ball popped out to Lily Redding, who after a graceful first-touch, launched a rocket over North Carolina’s goalkeeper to even the score at 1-1.

“At times today I felt like we were chasing the ball and chasing the game,” Flynn said. “But as soon as we got a foothold in the game, we started to believe in ourselves. And when we showed that belief, we started getting scoring chances. Lily’s goal, we had a team meeting and all agreed that was a huge turning point in the game. It gave us belief that not only could we compete with North Carolina, but we could beat them.”

The two sides continued to trade chances to end the half, but neither side could pull ahead. Following the halftime break, both NC Courage and DKSC made a commitment to finding a go-ahead tally throughout the second half, but the backlines for each squad stood strong.

With the game destined for a draw, DKSC’s pressure won out, and Love was able to give the Dallas club the last-second victory.

“That was an awesome game,” Flynn said. “North Carolina is a great team and they pushed us to the very limits. Getting that last-minute goal, everyone was over the moon.”

DKSC is now 1-1 on the weekend, and will look to close out ECNL Florida – Club Competition on a high note Sunday against Alabama FC.

ECNL Florida – Club Competition and all ECNL national events are about challenging clubs and pitting teams from different regions in the country against each other to present new wrinkles. It’s why Tennessee SC loves coming to events, and Saturday afternoon, the Nashville squad saw that first-hand against Heat FC.

“We look forward to these events because we get to play teams outside our conference,” said Coach Ronnie Woodard. “It’s so great to see how you measure up against some of the best in the country, and the ECNL does a great job with scheduling. So we see different shapes, styles of play, coaching, and it really helps make our players better.”

Five minutes into the match, Tennessee SC methodically worked the ball down the pitch, eventually finding a hole in the Heat FC defense, and Kathleen Collins put a shot into the back of the net to take a 1-0 lead.

In the 17th minute, Heat FC’s Carla Malone raced for a 50-50 ball. Tennessee SC’s goalkeeper sprinted off her line to try and win the ball. Malone got there first, beat the charging keeper, and slid in a shot from 20 yards out to make it a 1-1 game.

That tally lit a fire for Heat FC’s offense, as the goal sparked the club and they pushed numbers forward. Tennessee SC was forced to weather the storm, and it looked like Heat FC was going to take a lead into the half, but the backline was strong enough to keep it at a 1-1 contest through the first 45 minutes.

At halftime, Coach Ronnie Woodard challenged her club with a new scheme and new offensive plan: maintain possession and keep the ball on the ground.

“They were a spirited group,” Woodard said. “They were out-gritting us, winning 50-50 balls, so surviving the first half was really important to us. They were isolating us, they had a size advantage, so we decided to put the ball on the ground and had to maintain possession. I challenged them to look at the second half as a new opportunity and that’s exactly what they did.”

Those adjustments proved to be the difference-maker. Mariana Miller beat the Heat FC goalkeeper to give Tennessee SC in the 59th minute, and then in the 81st minute, Isabella Macaso iced the game with her goal, pushing Tennessee SC’s lead to 3-1.

Through the first two games of the weekend, Tennessee SC faced clubs from the Northeast (FC Stars) and Southwest (Heat FC), and playing teams outside of its conference is a major incentive for Tennessee SC. Being able to be tested and have to defend different playing styles is huge for player development, and Ronnie was proud of how her club rose to the occasion Saturday.

“Coming off a holiday break, sometimes it can take a while for the girls to find their game and get their legs under them,” Woodard said. “But it was really fulfilling to see them find themselves, stretch outside their limits and find a way to get a victory. It’s so important for our players to be stretched out of their comfort zone. Growth happens when an individual is challenged, and for us to play teams we’re not familiar with, it makes for better players.”

With the majority of their conference season on the horizon, Tennessee SC is ready for what’s to come, and ECNL Florida – Club Competition will put them on the right path.

“Right now, we’re going into our traditional training season, and we’re establishing our system and our style,” Woodard said. “We’re fine-tuning parts of our game and we’re getting ready for our conferences matches. These games are a big part of that.”