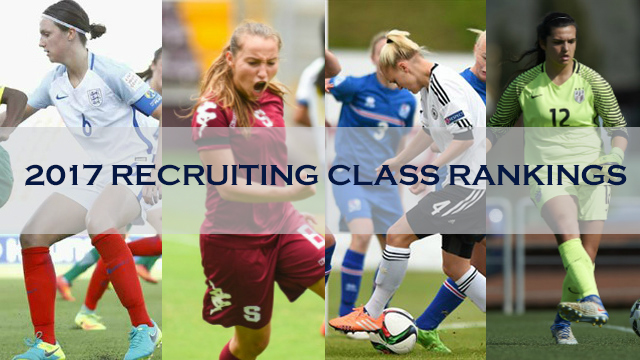 The 2017 women’s Division I recruiting class landscape continues to change ever so slightly as the march towards August continues.

In the latest update, a few sides shuffled up with recruiting news trickling out, with most schools already releasing details.

Below is the July update to the 2017 girls recruiting class rankings based upon the latest class announcements. The rankings will get one more refresh before the start of the season in August when rosters around the country are fully updated.

Please send any corrections to commit@topdrawersoccer.com.

The addition of Sam Hiatt on transfer – just the second in program history – bolsters Stanford’s back line, the one position that needed to be addressed. There is also a bevy of incoming strikers that should be able to impact the game right away in Kuhlmann and Macario. The Cardinal has an ironclad grip on the No. 1 spot, one that is unlikely to be relinquished between now and August.

Any recruiting class that features arguably the best player in the group is going to be a good one. Ashley Sanchez will help UCLA cope with the departure of Mallory Pugh to the pro ranks, and there’s a number of other promising and talented California players heading to Westwood.