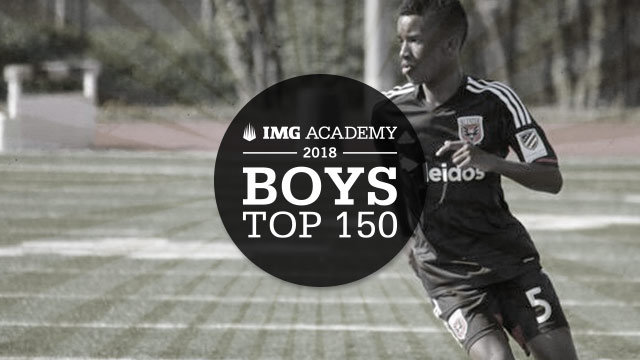 The IMG Academy Top 150 rankings update for boys in the 2018 graduating class is out today, and the U.S. youth national teams have been busy since our last update. Two players in the top 20, Philadelphia Union defender Rayshaun McGann (No. 17) and Portland Timbers midfielder Adrian Villegas (No. 18), started 2015 with a trip to Turkey with the U.S. U16 Boys National Team. Both have followed up with subsequent camps, McGann with the U16s, and Villegas with the U15s, and Villegas especially is stirring up some homegrown buzz in the northwest.

One more player to climb into the top 20 this quarter, at No. 20, is LA Galaxy forward Kevin Negrete. Negrete stood out with the Galaxy’s U16s at the Development Academy Showcase, has attended two U15 BNT camps, and was recognized by U.S. Soccer as the top player at the SoCal futsal regional event in January.

Three midfielders to climb significantly this go ‘round are PDA’s John Murphy, Real Salt Lake AZ’ Aristotle Zarris, and Prince Williams SI’s Eric Valentine Calvillo. Murphy leads PDA’s U14 Development Academy squad in goals (7), earned his first call up to the U15 BNT this month, and climbs from No. 79 to no. 42. Zarris, who climbs to No. 57, moved this season from Chargers (FL) Development Academy to Real Salt Lake AZ where he has thrived and is the U16s leading scorer. He’s back in Florida this week, but on the national stage at U.S. U16 BNT camp. Calvillo, who climbs to No. 62, was first noticed as a standout at last year’s TDS Tri-State Combine, and has since been picked up by the U15 BNT, with some prominent regional scouts taking notice as well.

A few players stood out enough over the past few months to be added to the rankings, including Arlington SA center back Zachary Johnson and De Anza Force goalkeeper Brady Scott. Johnson, at No. 50, commands the back line exceptionally well for Tony Damiani’s USYS National League squad. Scott, at No. 74, was a regionally ranked player for Marin FC last season, but made the move to De Anza Force for 2014-15, and like Zarris, is in Florida with the U16 BNT.

In addition to the IMG Academy 150 update, we have made key changes to the regional rankings which will be unveiled throughout the week. Some of the additions include Weston FC forward Alfred Perez, FC Tampa midfielder Tyler Dueker, Dix Hills SC defender Matthew Baressi and many more. Keep checking back throughout the week to see who else made the lists.