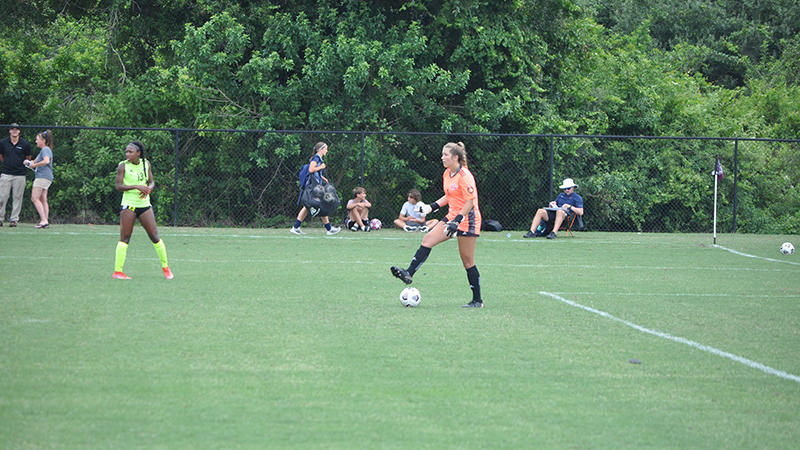 After (mostly) whittling down the field at the ECNL Playoffs, the 2020-21 season comes to a close this weekend in Richmond, Virginia.

Tropical Storm Elsa forced the cancellation of the final two days of play, meaning that the U13 semifinals and final will take place this weekend, and the U15 teams start on Saturday with the quarterfinals.

The U13, U14, U16 and U17 squads will play out a final four, with a national champion crowned on Sunday. The U15s will finish on Monday.

While the youngest age group was meant to be finished in Florida, four powerhouse sides are traveling to Central Virginia. Eclipse Select made it to the semifinals with a shootout win against FC Stars Blue, and a 2-1 defeat of Crossfire Premier.

Solar meets Eclipse in the semifinal, after the Texas side defeated So Cal Blues by a 4-3 score, and then topped fellow Lonestar state side Dallas Sting 4-2. Jordan Hill and Kamryn Fuller have been two of the key attackers for Solar this season.

Two California teams square off on the other side of the bracket. San Juan SC has yet to lose, spinning off a pair of victories in Florida against PDA and Concorde Fire Platinum after posting a 7-0-0 record in conference play. LAFC Slammers have shown a tough defense, not conceding a goal in the first two games of the playoffs, advancing past SUSA FC and Tennessee SC.

Jacksonville FC vs. So Cal Blues

At this age group, the question is whether or not anyone can slow down Solar. The team finished the regular season with 108 goals scored and 11 conceded in 22 games; they backed that up in Florida with 23 for and one against, trouncing a talented MVLA team by a 7-0 score in the quarterfinals. There’s a long list of players to note, including Dezeriah Scott, Zoe Matthews, Coda Jones, Jordyn Hardeman and Hannah Jordan, to name just a few.

Jacksonville FC knocked off a talented PDA side to win its group, and have a strong all-around team. Taliah Brooks was one of several players to excel in Florida. The two sides from California, LAFC Slammers and So Cal Blues, are far from underdogs either. The Blues posted a 12-0-1 record in conference play; Slammers have lost just two games all season, postseason included.

The potential of three games in three days awaits the U15 ECNL squads traveling to Richmond.

The field is relatively wide open, though Solar was the No. 1 overall seed based upon regular-season record. The Texas club will hope to grab at least one national championship in Virginia, and this could be their best shot. Internationals SC is a talented squad, with several impressive attacking players. Amalia Villareal has been one of the key players for Solar this season, while Gianna Scott, Katie Scott and Eleanor Klinger are some of the Ohio side’s top players.

Kennedy Roesch and Amanda Watkins have been two of Surf’s most dangerous offensive players, but will contend with a Colorado Rapids team capable of controlling games. Alexis Meyer, Amy Smith and Kiana Sparrow are a few of the players to contend with from the Colorado side.

Both World Class and Challenge SC advanced past higher seeded teams. They can’t be overlooked, as the two sides blend solid defensive work with a handful of difference makers in the attack. Challenge didn’t concede a goal in the three groups games, while World Class managed to secure the requisite results to advance past LAFC Slammers.

Kansas City Athletics played just nine regular season games, but won their group with an unbeaten stretch in Florida. They showed that ability to click offensively, with 13 goals in the three-game stretch. A 2-1 win against MVLA on the final day secured first place in the group for WNY Flash, which advanced with two draws and a win. Carrying that over to Richmond will be important in the first matchup against KC.

The two oldest age groups in Richmond should provide plenty of compelling and competitive action. Four powerhouse sides look for the advantage here. Richmond United gets an opportunity to compete for a title close to home; the attack is loaded, with Sarah Rosenbaum and Olivia Woodson a fearsome duo up front. Skyler Miller and Sarah Flammia can unbalance defenses with their ability to take players on with the ball at their feet.

Regular contenders for ECNL titles, PDA’s only chance comes at this age group. Offense carried them to this point, scoring 18 goals in Florida. Kennedy Garcia’s ability to stretch the field and lead the line is going to be an important part of PDA’s game plan. Several players have made this trip before, as PDA Blue won the U14 championship back in 2019.

While offense carries the day for the first two squads, defense and control laid the foundation for LAFC and Tampa Bay’s progress. The California side is no stranger to a finals spot at this age group, making a third appearance with this age group (they were runners up back in 2019 as U14s, losing to PDA Blue). Malia McMahon, Reese Doherty and Angelina Moschetti are some of the players to watch for Slammers.

Tampa Bay United Rowdies has every chance to pick up a win here. They have quality in all three lines, whether it’s the back line, anchored by Jada Silvest, a dynamic and mobile midfield standout in Tanner Strickland, while Kathleen Collins leads the line.

The oldest age group just might have the best for last. MVLA makes a third straight national finals appearance with this squad; they won it in 2018 as U14s, lost in the national semifinals in 2019, and obviously didn’t play last summer. It’s a relatively similar group, whether it’s the attacking talent of Allison Montoya, Leah O’Brien or Amalie Pianim and a defense that includes Jasmine Aikey.

Standing in the way of MVLA are three very good teams. The first is yet another Solar side, this one just as prolific as the others. They scored 80 goals and conceded just four times in the regular season, winning three games in Florida and advancing on penalty kicks. Solar is loaded in every line, with Treasure Byars, Sydney Becerra and Tyler Isgrig coming together to form a potent attack. Drew Stover is solid behind a very good back line.

There’s plenty of talent coming from Georgia to Virginia with the United Futbol Academy. Heidi Harris and Mia Riddick usually share time in goal, and will be crucial if UFA is to come away as winners. Tori DellaPeruta and Elizabeth Fleming Dean are two attacking players to keep an eye on.

Rounding out the quartet of high-level clubs is an LAFC Slammers group that dominated in Florida. While they don’t have the same attacking numbers of Solar, they only lost one game this season, against FC Dallas at a National Event in the fall. Interestingly enough Slammers did play MVLA at that even in Arizona last fall. Goalkeeper Nona Reason is the top-ranked shot-stopper in the class, while Madeline Baker and Samantha Baytosh are also ones to know.