96s from Regions I, II, bring spark of life 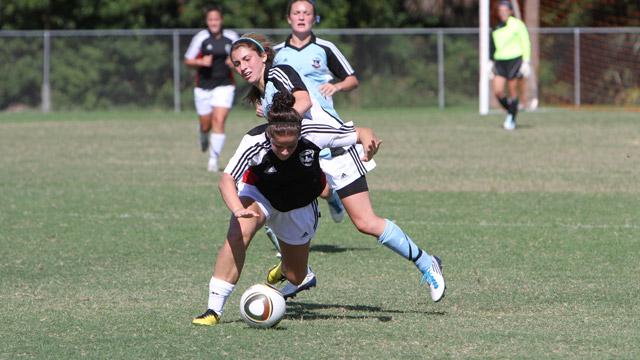 BOCA RATON, FLORIDA – A match between two teams in the youngest age group brought a ray of sunshine to the U.S. Youth Soccer Girls ODP Interregional.

As I wrote yesterday, there is a lot of doom and gloom being spoken under sunny skies about the lack of creative, attractive and sophisticated play here among this gathering of the nation’s top players.

The game between Region I and Region II in the 1996 birth year age group, especially in the opening half, was an exception.

The match featured a lot of combination play, teams attacking in numbers, players moving intelligently off the ball and with the technical ability to make good ideas become legitimate attacking and scoring opportunities. While Region II won the contest by a 2-0 score over their counterparts from the east, both teams gave a very promising performance.

The opening goal, scored midway through the 1st half, was the goal of the week so far as I have seen. KC Select’s Dorian Bailey started the move with a good pass through the center to Michigan Hawks’ attacker Megan Buckingham, who had made an intelligent run off the ball. Buckingham then resisted the urge to hit a predictable shot, and instead made a perfect touch into the path of Carmel United’s Reilly Martin, who finished like a pro to make it 1-0 for Mark Sheldon’s Region II side.

While that was the only goal in the opening 40 minutes, the Midwesterners and Region I both were showing an ability and a willingness to play the beautiful game that I hadn’t seen so far this week. Another player I really liked from Region II was Carmel’s Samantha Kokoska, who has good feet and plays intelligently, but really the whole team was working like a clock.

Here’s what the coach had to say about the performance of the two teams.

And take nothing away from Region I.  Kevin Long’s group also showed the ability to produce combination play, and while a goal didn’t come on the day, some quality soccer did. I was especially happy to see a pair of sisters from New Jersey, Sabrina and Monica Flores, play the way they did. Every ball was on the deck and on target. Their movement off the ball was excellent and both girls, while being two of the smaller on the field, were also tough as nails in winning tackles and competing for possession. These two are going places. I spoke with them afterward and while they are a little on the shy side, I want you to remember these sisters from New Jersey.

The 2nd half slowed down to be honest. I liked Michigan Hawks’ trio Kate Morris, Cassie Phillips and Courtney Petersen in this stanza. The other goal in the match came just before the final whistle as Maddie Huster played in a lovely corner and Sophie Babo got herself wide open to head home from close range for a final score of 2-0.

Here is a video of Region III’s 96 team warming up before their match with Region IV.

A couple of players I really liked on the day from Nate Shotts’ westerners were left back Arianna Hudson of FC Portland and Sarah Robinson of Northern California club MVLA Lightning. Hudson has a great soccer brain, knowing when to run into space offensively and where to position herself on defense.

Additionally she is very good on the ball, a good athlete and tough as nails. Robinson showed a lot of quickness but also creativity in the attack, playing a number of dangerous balls for teammates. Real Colorado’s Kaycie Young in midfield and So Cal Blues’ Indigo Gibson in defense also played solid games. I thought Savannah McCaskill of South Carolina United was a bright spot for Region III.

In the 1995 birth year age group Wednesday, Region II beat Region I 1-0 on a goal from Ohio’s Micaela Powers and Region III defeated Region IV 2-0, with Hurricane FC’s Elizabeth Keester and CASL’s Claire Wagner providing the scoring.
Finally, any time you get so many soccer people gathered in one place you are likely to have some stories, but we uncovered this little insight into what some women’s soccer coaches, notably SEC rivals Becky Burleigh of Florida and Ronnie Woodard of Vanderbilt, do in their off time. Check out the video.

I will not be getting MY nails done, but I WILL be back out at the fields on Thanksgiving morning covering matches involving the 1993 and 1994 players, plus a final game from the U15 Girls National Team.