FRISCO, Texas – The USSF’s Development Academy Playoffs Week concluded on Friday with the U16 teams battling for spots at Finals Week, which will be held in Houston, Texas in July.

CASL has had at least one team at Finals Week every single year in the Development Academy . . . except this season. 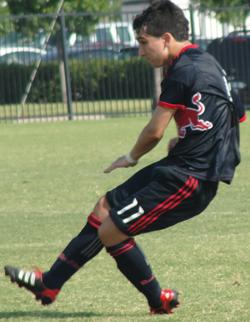 With CASL’s U18 failing to advance from its group on Thursday, all of the pressure to keep the tradition alive fell squarely on the shoulders of the U16 team, which entered Friday’s tilt ahead of New York in Group 1 based on goal difference.

The circumstances played little part in the proceedings though, as the Red Bulls free flowing, talented attack grabbed hold of the game in the opening 20 minutes and did not let go for the remaining hour.

In the 15th minute, Alex Muyl put New York on the board in move he made look very easy. The attacker squeezed between the two CASL center backs, brought down the ball with his chest, and fired past the goalkeeper for the first goal of the game.

Two minutes later, Amando Moreno let the New York fans and players breathe a little easier with another goal. Moreno fought through a few defenders before slotting his shot past the keeper.

“That was really important,” Muyl told TopDrawerSoccer.com about getting the early lead. “If it dragged out, we knew we were in trouble. The U18s dragged out and didn’t advance. So we knew we had to come out and be intense – they [CASL] were just as intense, but we put our chances away.”

CASL fought to get back into the game, but New York’s ability to possess the ball and keep the North Carolina club chasing did not leave much room for error from CASL’s strikers.

Unfortunately for CASL, it was an off day for its normally very good forward group in front of the net. The best chance came 15 minutes after half time when Yanni Hachem had a good look at goal near the top of the box.

Hachem’s shot was saved by Joe Ohaus, who went 234 minutes without conceding a goal at this event since letting one in early during the first game against FC Dallas.

Stevens and Miazga shut down CASL’s Evan Deycaza on Friday. The striker came into the clash with goals in his last nine games. The physical twosome did not give Deycaza any space and held the prolific attacker to zero shots on goal over the 80 minutes.

Ismar Tandir capped the scoring for New York with a calm finish in the 65th minute. Tandir, who is a tall striker, showcased a great first touch to move away from pressure and then coolly finished around the CASL keeper for the final goal of the game.

Much of New York’s success on day came thanks to someone who did not make the score sheet - Arun Basuljevic – the center midfielder who dictated the pace and flow of the game against an outmatched CASL midfield.

“I think Arun is a fantastic player,” Elliot said. “Obviously, this is a good team, but people who know our team know he is one of our top guys.”

Basuljevic was superb all week, and definitely caught the eye of a few spectators. When asked if Basuljevic might be in line for a call up to a youth national team, Elliot said with a smile, “I don’t make those decisions.”

Last year, St. Louis Scott Gallagher Missouri came so close to advancing to Finals Week that it remained on the minds of the players and coaches throughout this season. 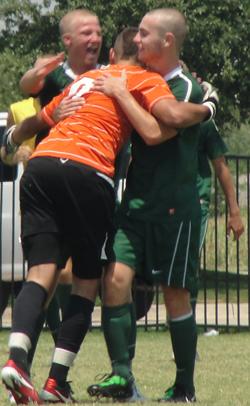 This time, the Missouri club got its redemption on the final day of group play on Friday with a 1-0 win over New Jersey club PDA and a trip to Houston, Texas on the horizon.

Nick Jones scored in the 70th minute off a long ball over the top that he raced onto and finished around the PDA goalkeeper Kevin Silva.

“I just tried to get my body in the right position, and luckily enough I finished it right under the keeper’s hand,” Jones, the Wisconsin-bound forward, told TopDrawerSoccer.com. “It was just a fight and luckily we came out on top.”

Fight might be an understatement. With two extremely competitive and talented teams battling for a Finals Week spot, both squads refused to give an inch throughout the game.

The opportunities were few and far between.

The best goal scoring chance in the first half came via Gallagher’s Austin Panchot. The midfielder snuck into the box on a long throw in and nearly nicked in the opening goal, but Silva pushed the shot over the bar.

Scoreless at the break, the word passed through the sidelines that Solar Chelsea SC held a 1-0 lead over Surf in the other Group 8 game. With Solar’s lead, Scott Gallagher only needed a draw to advance.

The updated news did nothing to the complexion of the game and the teams kept with the game plan.

PDA looked to have broken the seal only 12 minutes after the break when Kazari Trought dribbled past a few defenders and whipped the ball across the box. Zach Knudson put the final touch on the cross to direct toward goal, but a sprawling Jacob Leeker made the impressive save.

After Jones’ goal, PDA really tried to put pressure on Scott Gallagher in search of an equalizer, but the defense, which was led by Jordan Klipsch and Jason Pesek held on.

The game did not end without incident though, as Curtis Schillingsford was sent off in the 78th minute for a rash cleats up sliding challenge on Trought. Despite playing down a man for the final few moments, the Frontier Division Champions booked their place in Finals Week for the first time in club history.

“It means a lot,” Jones said about making history for the club. “We almost had it last year, but lost in the last couple of minutes. To actually get this year, it means so much to me and the rest of the players . . . it is incredible.”

The coach echoed the sentiment.

“It means everything,” head coach Tim Leonard told TopDrawerSoccer.com. “Seven months of hard work pays off. The character of the group and the way these guys have fought all year is so gratifying and it is an honor to coach them.”