FRISCO, Texas – With the U18 age group using Wednesday as a recovery day before the final group games on Friday, the focus of the day was on the younger age group.

The U16 teams provided some memorable games with the competition getting kicked up a level with opportunities dwindling before play wraps up on Friday.

U16 Recap from Day Two | More U16 Recaps from Day Three

Christian Soldat scored 32 seconds into the second half off an assist from Brandon Aubrey, and the Texans held on to a 1-0 result in their second game from Group 2. 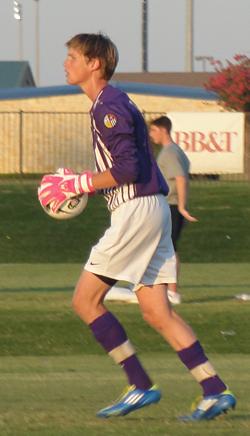 The first half did not offer any meaningful moments as the two evenly matched squads went toe-to-toe in the midfield without many scoring chances.

However, Soldat’s speed and Aubrey’s vision unlocked the game in the 41st minute, as the Texans took the lead with the New York club slow out of the game in the second half.

“At half, we talked about getting behind them and it worked right away,” Texans head coach David Hudgell told TopDrawerSoccer.com. “It was a good goal.”

Soldat’s pace helped him elude the final Albertson defender, and then the speedster neatly shot the ball around the keeper for the lone goal.

After the goal, the Texans had a couple more chances to double the lead and put some distance between the teams, but the local squad failed to convert.

In the final 20 minutes, Albertson threw numbers forward in hopes of finding the equalizer, but fortune favored the home team on the day.

The New York club’s two best chances came in the final 10 minutes when U.S. U18 Men’s National Team defender Dylan Greenberg, who plays in the midfield for his club, broke free from the Texans defense.

In the 72nd minute, Greenberg had an open header at the far post that looked bound for the back of the net, but Texans keeper Robert Harrison made a great diving save to keep the shutout.

“He has done that all year long,” Hudgell said. “He is a big part of the success we have had.”

Five minute later, Greenberg had another header for a tough angle that looked like it might cross over the line with Harrison out of his net, but outside back Brandon Moore cleared the ball from danger and helped the Texans secure three points.

With the other Group 2 game happening behind the Texans’, Hudgell was aware of the score (Pateadores won 3-0 over New England Revolution), but he was not showing any worry after the game.

Texans are even at the top of the group with Pateadores, as both teams sit on four points. Texans take on the Revolution on Friday while Pateadores face Albertson.

Shattuck-Saint Mary’s captain Kevin Beyer hit an absolute stunner with only three minutes left in regulation for the game-tying-goal.

Beyer, alone 20 yards from goal, ripped a shot into the upper corner for the net for his first goal of the season and secured a meaningful point for the Minnesota club.

The captain’s goal left both Shattuck-Saint Mary’s and Crew Soccer Academy Wolves level on four points in Group 5 with only one game to go on Friday.

While the Wolves had a few looks from distance in the first half, it was the Minnesota club that got on the board first.

Center back Robert Sagel made a charging run down the right side of the field, before sending in a cross that was eventually tapped in by outside winger Akeem Ward.

Sagel’s run showcased a solid technical ability with a good first touch on a ball hit behind in while running at full speed. The defender has appeared with various U.S. youth national teams in the past.

After the half time break, the Wolves took control of the game and dictated the play. For Wolves’ positive play, they were rewarded with a goal 12 minutes after half time.

Midfielder Oliver Harris cracked a shot from distance that was deflected and skimmed over the top of the crossbar.

The day was not over for the attacker. Twenty minutes later, he flicked on a cross into the box, which caught the opposing keeper off his line and gave the Wolves a 2-1 advantage.

However, SSM nearly answered right back with a golden opportunity three yards from goal when the Wolves were in shambles defensively on a cross.

SSM blew the chance and looked to be headed for a defeat before Beyer’s  thunderous strike erupted the Minnesota club’s fans and saw the two squads settle for a 2-2 draw.

The tall striker for the MLS academy came off the bench in the first game on Tuesday for the Red Bulls with some success in a 2-1 win over FC Dallas.

But head coach Robert Elliot took off the leash on Wednesday and let Tandir start and was handsomely rewarded. Tandir had an easy tap-in early in the first half for the first goal of the game.

Only minutes later, Tandir dribbled past two defenders before dropping a gorgeous heel pass to Alex Muyl. The midfielder picked up the pass in stride and rifled it home for the second goal of the game.

New York is tied for top honors in Group 1 with CASL Chelsea FC after Wednesday. The two teams play on Friday with a spot in Finals Week on the line.