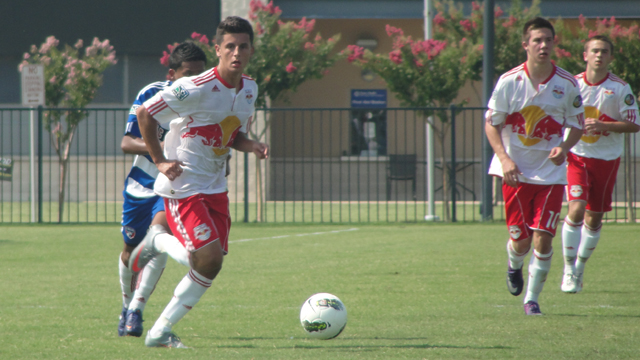 FRISCO, Texas – Day two of the Development Academy playoffs brought much of the same from day one: scorching hot temperatures, fiery play, and some dramatic finishes.

With the U16 teams joining the fray on Tuesday, the amount of games rapidly grew and forced some of the playoff fixtures to be held during the 4 p.m. slot.

See which U18 teams ruled the day at the Academy Playoffs

The early start did not sit well with New York Red Bulls U16 head coach Robert Elliot who expressed his concern after a 2-1 win for his squad against FC Dallas. 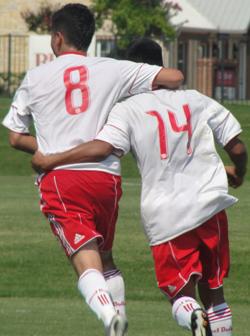 “The weather was a factor,” Elliot told TopDrawerSoccer.com. “They should really think about scheduling playoff games a little later. It was good for our guys to fight through the heat – they [FC Dallas] are used to it, we aren’t.”

Despite the heat, the game offered quite a bit of quality and some skillful players seized their chances.

FC Dallas grabbed the first goal in the sixth minute when Antonio Aguilar’s diving header connected on a cross to put the local side up a goal early.

But the New York club answered back six minutes later to level the score. Amando Moreno hustled to a ball that looked bound to trickle over the sideline.

Moreno’s effort kept it in play and had FC Dallas’ defense out of sorts. The outside winger quickly found center midfielder Adam Najem who linked up with target man Alex Muyl at the top of the box to break through the defense.

The Akron-bound midfielder rolled the ball past the Dallas keeper for the tying goal.

In the 26th minute, New York scored the game-winner with Moreno claiming the honor this time. Arun Basuljevic started the movement with a slalom run through the Dallas defense from the midfield.

The in-cutting Moreno picked the ball off Basuljevic’s foot and took one touch before rifling it home for the winner.

The Red Bulls return to the field tomorrow for a 6:30 p.m. showdown against Georgia United, which lost its first game 3-0 to CASL Chelsea FC.

With a four o’clock kickoff and temperatures hovering around 105 degrees, RSL jumped to a 2-0 lead within the first 20 minutes of the match. First, Lopez played in a nice through ball for Navarro to open the scoring for RSL, and then Navarro returned the favor a short time later.

After the uneven start, Seattle began to claw its way back into the game, and midfielder James Nosack pulled a goal back for the Sounders when RSL’s back line properly failed to deal with a long throw-in.

RSL kept the pressue on, as Navarro fired wide on a good look, and midfielder Andrew Brody hit the crossbar. Lopez restored the two-goal cushion before the half.

Trailing by two goals, Seattle began to settle into the game, and it wasn’t long before Nosack scored again to narrow the deficit. And before Navarro’s second of the game, Seattle looked the more likely of the side to score, as forward Denis Kalamar had a couple of good looks on goal.

But RSL managed to keep focused as Seattle’s attack continued.

“We were very good at not switching off at crucial situations,” Bruce said. “When they upped their game, it would be easy for us when the ball went past not to chase back. But we did that. We chased back, we tracked players, we didn’t give ‘em good looks on goal.”

As Seattle poured forward, the pressure paid off and Navarro scored again to put the game out of reach – earning praise from the coaching staff along the way.

Jorge Calix scored two goals as D.C. United began its playoff week with three points against a tough and determined Concorde Fire side.

Calix, a member of the Under 17 Residency program, only joined back up with the team a few weeks ago, but fit seamlessly into the side, scoring a goal in each half as D.C. seized control of the game in the second half. 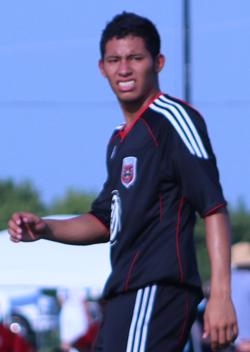 “He had done some training and worked with the group before he went to residency as well but it was kind of like he never left, he jumps right in, affects the game and he changes things,” D.C. U16 head coach Tom Torres said of Calix.

Thanks to the work of forward Michael Seaton, Calix opened the scoring in the first ten minutes of the game. Seaton bullied past a Concorde Fire defender on the edge of the box, and his sprawling cross was cleared to Calix, who fired past Fire goalkeeper Johnny Klein.

From there, the conditions clearly had an impact on the game, as neither side could muster a coherent attack for much of the first half.

A tactical switch by D.C. turned the tide, as the club swapped a 4-3-3 in favor of a 4-4-2. That allowed them to control the midfield more, and after a couple of near misses and a goal waived off for an offside call, Seaton restored D.C.’s lead when he cleaned up a Calix shot that caromed off the crossbar.

And it was Calix again who scored D.C.’s third on the day, as a free kick taken from the corner went straight in untouched, assisted by a nice breeze blowing towards the Fire goal.

From there, D.C. was able to maintain possession and see the game out, getting the week started on the right foot.

“You certainly want to open a playoff style tournament on the right foot with a three-point game or a victory,” Torres said. “The boys feel like they’re a good enough group to compete here, whether they show up and put together a complete 80 minutes and the mentality right, we feel after this game they should be able to come with the right mentality tomorrow.”

In the other game from the group, Shattuck-Saint Mary’s Soccer Academy cruised to a 4-0 victory over Texans SC Houston. Steve Eneme, Heath Honold, Mark Brown, and Karl Frisk found the back of the net in the one-sided result.

PA Classics U16 pounced on Arsenal early and held on for a 2-1 win in Group 7 action. Connor Maloney hit a beauty from distance to give the Pennslyvannia club the lead in the first half. Shawn Peterson doubled the lead for the Classics in the second half. Brian Charles cut the deficit in half late for Arsenal, but the Classics, which entered the playoffs as the 32nd seed of 32 teams, held on for the victory.