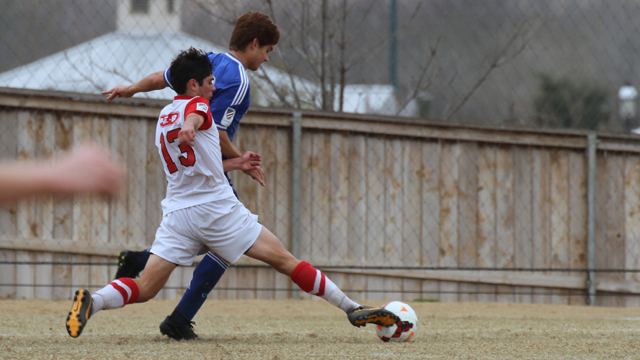 It was a weekend of sweeps in the Development Academy as LA Galaxy and Philadelphia Union both pulled off impressive nine-point outings between the three age groups in their respective conference affairs.

LA Galaxy pulled off the sweep in the Youth SuperClasico over the weekend with wins in the U14, U16, and U18 age groups against Chivas USA. LA Galaxy U14 started the day with a 4-0 win over Chivas USA. Noa Harrison and Leo Zulli both scored two goals. Galaxy followed that up with a 4-3 win in the U18 age group. Jaime Villarreal scored a hat trick, but it was Steve Martinez with the game-winner in the dying seconds to snag the win. Paul Salcedo, Rolando Munoz, and Michael Flores scored for Chivas USA U18. LA Galaxy U16 completed the nine-point day with a 3=1 win. Rey Ortiz, Adrian Vera, and Christian Onalfo scored the Galaxy. 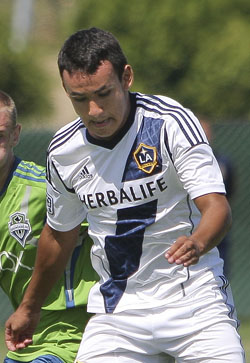 The big weekend for Galaxy helped close the gap on Real Salt Lake AZ U18 at the top of the Southwest Conference. RSL AZ battled to a 2-2 draw with Seattle Sounders over the weekend. Sam Gleadle and Gui Lemme scored for RSL-AZ. Satoshi Chaffin and Victor Rojas found the back of the net for the Sounders. Justen Glad, Joshua Doughty, and Terrell Lowe scored for RSL AZ U16 in a 3-1 win over Seattle Sounders.

Real So Cal benefitted from Chivas USA defeat in the U18 age group. Real So Cal topped San Diego Surf 4-0 on Saturday. Alex Simon score twice on the day. Chester Castellaw and Daniel Mondragon had the other two goals. The teams played to a 1-1 draw in the U16 age group.

In Northern California, Arda Bulut added to his ridiculous goal tally with three second-half goals against Diablo Futbol Club on Saturday. De Anza Force U14 cruised to a 5-1 win in the game.

Bulut is still trailing San Jose Earthquakes’ Kaya Fabbretti on the scoring charts though; as Fabbretti scored a hat trick in an 8-0 win over Ballistic United Soccer Club on Friday.

Solar Chelsea SC rolled to a pair of wins over Texas Rush over the weekend. Alan Winn and Zachary Stavrou both scored two goals in Solar Chelsea SC U18’s 6-2 victory. Blake Stricker and Jordan Shankle scored the other goals for Solar. In the U16 game, Solar also won 6-2, which kept the Dallas team in the third spot in the Frontier Division.

Houston Dynamo U16 remained in the second spot in the standings thanks to a huge weekend from Juan Flores. The Dynamo forward opened the scoring on Saturday in a 2-1 win over Colorado Rush. Juan Martinez scored the other goal for Dynamo. Flores followed that up with a hat trick on Sunday in a 4-4 draw against Real Colorado. Kendrick Kwan had the other goal for Dynamo. Robert Jacobs scored twice for Real Colorado with Damen Marcu and Cody Ross contributing with the other tallies.

In the U18 age group, Spencer Goldstein scored his eight goal of the season to lead Colorado Rush to a 1-0 win over Houston Dynamo. Rush remains in second in the division standings. It was an empty weekend for Dynamo as Real Colorado also snagged all three points in other fixture with a 2-1 result. Gannon Gardner and Blake McNelis scored for Real.

Chicago Fire U18 kept hold of the top spot in the Mid-America Division with a pair of 3-0 wins over the weekend. Fire beat Crew Soccer Academy Wolves on Saturday and then Vardar on Sunday. The games were the first since December for the MLS academy.

Carolina Rapids U18 was held to a 2-2 draw on Sunday in the big showdown in the Southeast Division. Rapids needed a win to take control of the top spot in the division, but the split points leaves Capital Area RailHawks Academy – CASL in the top spot for another week.

Philadelphia Union secured nine points from three games against PA Classics on Saturday. Union started the day with a 4-1 win in the U18 age group. Matthew Greer scored twice and Doyle Tuvesson and Neicko Williams added the other goals in the win. Armin Efendic scored late for Classics. In the U16 games, it was goalkeeper Cameron Keys who was the hero with a late penalty kick save to preserve the 2-1 win for Union. It was only the second loss of the season for Classics in divisional play. Classics remains in the top spot in the Atlantic Division. Union rolled to a 7-0 win in the U14 age group. Tonny Temple scored a hat trick. Juan Pablo “The Bachelor” Infante scored his 14th goal of the season in the lopsided win.