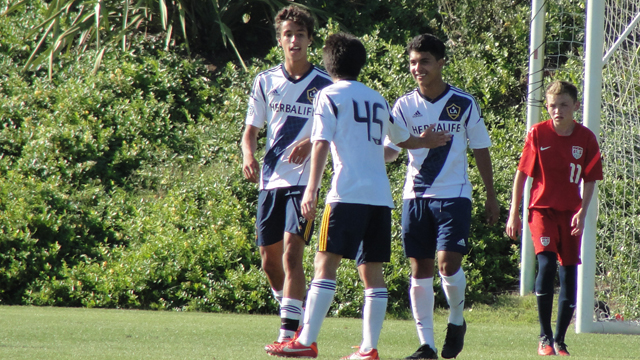 The LA Galaxy U16 remained the only team with an undefeated record in the U16 age group over the weekend after surviving a trip to Northern California for two out of division games. Galaxy won Saturday’s contest against De Anza Force 2-1 thanks to goals from Johnathan Ramirez and Christian Onalfo, which wiped out an early tally from George Korpontinos. Galaxy fought to a scoreless draw against Santa Cruz Breakers on Sunday. Bennett Sneddon logged the shutout in goal for the Galaxy. Despite the four-point weekend, the Galaxy still trail Real Salt Lake-AZ in the division standings with nine games left on the regular season schedule. 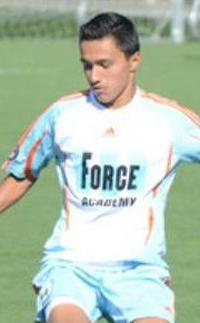 LA was not the only squad in action over the week. Check out a brief recap of the games below.

De Anza Force U18 defeated LA Galaxy in the highly anticipated tilt on Saturday. A late goal from California commit Aravind Sivakumar held up as the game-winner for De Anza in a 3-2 result. Cal Poly recruit Ramiro Molina scored the opener in the 31st minute for De Anza. Adonis Amaya provided the equalizer two minutes later for his 15th goal of the season. Carlos Delgadillo hit right back to give De Anza a 2-1 lead at the break. Galaxy’s Steve Martinez put the teams back on level terms with 13 minutes left in the game, but Sivakumar’s tally in stoppage time gave De Anza all three points.

Chivas USA U18 had the best of the weekend though. The Goats picked up six points with wins over Santa Cruz Breakers and De Anza Force to jump into third place in the Southwest Division. Paul Salcedo led the way with the lone goal against the Breakers and two against De Anza in a 4-1 win. The California commit has 11 goals on the season. Juan Sanchez had the other two goals in the game against De Anza.

Late goals were the story of the day in Northern California on Saturday as San Jose Earthquakes U16 and Pateadores also waited to the final minutes to decide the result of their clash. Quakes struck first when Yousef Diyab found the back of the net with 11 minutes left in the contest. Pateadores netted the equalizer nine minutes later via Noah Leong as the teams each left with a point from the clash. Kevin Belmonte scored the lone goal on Sunday for Pateadores in a 1-0 win over San Juan. It was the second goal of the season for the midfielder. Pateadores remain in third place in the Southwest Division.

Kaya Fabbretti continued his dominant season in the U14 age group with a hat trick on Saturday to lead San Jose Earthquakes to a 5-3 win over De Anza Force. Fabbretti has 22 goals in 12 games this season with the Quakes in Academy play. Ivan Valencia and Arturo Wuest also scored for Quakes on the day.

Colorado Rush U18 remained in second place in the Frontier Division following a 2-1 win over Lonestar SC Academy on Saturday. Austin Fuller and Spencer Goldstein scored for Rush in the second to lead the squad to victory. Austin Fagerberg scored for Lonestar.

Real Colorado is right on Colorado Rush’s heels following a six-point weekend. Real defeated San Antonio Scorpions and Lonestar SC during a two-game swing through Texas. Jesus Perez had a hat trick on Saturday in a 4-2 win over Scorpions. Perez added another on Sunday in the 4-2 win over Lonestar to bring his season tally to 11.

Texas SC Houston held FC Dallas U16 to a scoreless result on Sunday, which slightly closed the gap at the top of the division standings. Dallas still holds a seven-point lead over its competitior but has only managed three points from its last three games.

The race at the top of the U18 Southeast Division is tight heading into the home stretch. Capital Area RailHawks Academy – CASL holds a slight lead but Carolina Rapids, Concorde Fire and Charlotte Soccer Academy are all close to the leaders. CASL kept some breathing room over the weekend with wins over North Carolina Fusion and Charlotte Soccer Academy. Dominic Jensen, Stephen Megaloudis, and James Street scored for CASL on Sunday in the 3-2 win over Fusion.

Kendall SC remains the team to beat in the U16 Southeast Division following a 2-1 win over Chargers Soccer Club on Saturday. With Weston FC’s draw and Orlando City’s loss, Kendall SC’s victory was extra sweet for the Florida club.

In the showdown between the best teams in the U16 Atlantic Division, it was PA Classics that had all the laughs. Classics rolled to a 2-0 win over Players Development Academy and gained control of the top spot in the division. Austin Maloney and Robert Pozesky scored the goals for Classics in the win.

Check out all the scores from the weekend here.