With MLS preseason in full swing, a small selection of MLS Academy players have been lucky enough to travel and train with the first team on a daily basis. 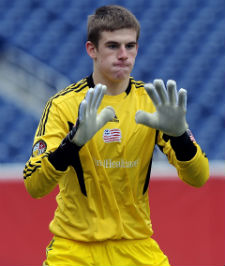 Goalkeeper Austin Aviza was one of those chosen, traveling with the Revolution to Arizona last week, getting the chance to show the coaching staff what he could do.

And while reaching the pro ranks may be in his long term plan, Aviza settled his short-term future by recently committing to Syracuse.

“Without hesitation, the reason that I decided to play at Syracuse was due to coach McIntyre and coach Miller and the program that they are building,” Aviza told TopDrawerSoccer.com. “From all of my interaction with them and from what I witnessed on my unofficial visits, they have clearly presented and demonstrated their commitment to building one of the best programs in the country. They are focused on the same goals of [ACC] Championships and National Championships that I have for myself. They were very clear with me that I would play a large part in helping them achieve these goals.”

The Orange already boast one of the nation’s best netminders in Alex Bono, who will be a senior by the fall of 2015, when Aviza would potentially begin his college career.

And while that fact likely didn’t escape Aviza, there was plenty more about the team that drew him.

“From the moment I stepped on the Syracuse field to observe training on my first unofficial visit it was obvious that there is great chemistry amongst the team including players and coaches,” he said. “The atmosphere was loose but focused at the same time. There is tremendous talent on the team and there is a lot of talent that is committing to come in future years.”

Playing in the ACC and the school’s facilities were also pluses, but Aviza was sold by the academic options he would have at the New York school.

“A Syracuse education speaks for itself,” he said. “I'm not quite sure yet which major I will pursue but I was impressed by all of the options available to me. The campus is stunning in all aspects from academics to athletics to social. I am well aware of the history of Syracuse and want to be part of a big school environment on a national stage.

“I chose Denver because I loved the coaching staff, playing style, and the program’s commitment to becoming Final Four and National Championship caliber,” he told TopDrawerSoccer.com.

Barlow, a box-to-box midfielder on FC Dallas’ first place U16 squad in the Texas Division, has played in 14 of the team’s 15 games thus far, showing a nose for the goal with five tallies.

The way that Denver plays caught his eye, as it was reminiscent of his current club team.

“I loved the possession and high pressure oriented system at Denver as well as the coaching staff's soccer intelligence,” Barlow said. “The style of play there is very similar to how the FC Dallas Academy plays, and it's a style that I think can bring a lot of success to a team. The coaching staff was very dedicated and smart, and I know it's a place that's going to help make me the best player I can be.”

Midfielder Martin Alba (Chicago Fire) committed to Marquette for the class of 2014.

Goalkeeper Henry Engel (Hawaii Rush) committed to Pomona-Pitzer for the class of 2014.

Midfielder Matt McCraith (Revolution Empire) committed to Navy for the class of 2015.