A joint decision with his brother Absalom played a pivotal role in Hector Solorio’s decision to commit to MAAC program Niagara.

“I decided to commit to Niagara because it was the best decision for me and my family and also my brother will be going to the school a year after me,” Solorio told TopDrawerSoccer.com. “And it will be a new experience for me since I will be living in New York.” 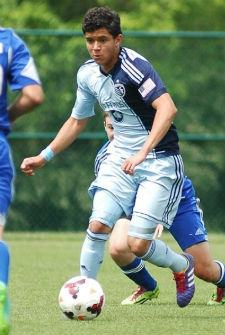 Solorio, who plays for Sporting KC’s U18 Academy side, found a team that fits the style he prefers.

“I like that they like to keep possession and that they attempt to play out of the back,” Solorio said. “I feel like I will adapt really quick to their style of play.”

Of course, going to school near one of the premier natural wonders of North America is a nice bonus.

“The school is very nice and in a good location,” Solorio said. “It is right by Niagara Falls and it’s a beautiful view.”

Two players are committed to Niagara for the class of 2015.

In the fall of 2016, Absalom Solorio will join his brother at Niagara.

Playing with Hector was a big part of the choice.

“The reason I committed to Niagara was because I wanted to play D1 soccer with my brother,” Absalom told TopDrawerSoccer.com. “My brother and I have grown up doing everything together, and last year we had the opportunity to play together, and we loved it. So after discussing this with my family, they all agreed that if we could go to the same college and stay together it would be best for the family, that way if they wanted to visit us they could go to Niagara and visit both of us.”

Solorio considered a number of options both near and far from Kansas City, but along with playing alongside his brother, head coach Eric Barnes and the rest of the staff played a role as well.

“What I liked about the soccer program was the coaching staff,” Solorio said. “Both the head coach and the assistant coach are great people and great coaches as well. I liked the style of soccer they play, trying to keep the ball and playing good attractive soccer.”

Absalom is the first commitment to Niagara for the class of 2016.

Midfielder Christopher Haskins (Bethesda-Olney) committed to Drexel for the class of 2015.