One of several DI programs to improve significantly over the past few years, recruits are starting to take notice of the way that Delaware men’s soccer has taken strides forward.

That, combined with academic opportunities, led Match Fit Academy midfielder Rob Gillin to commit to join the program next fall. 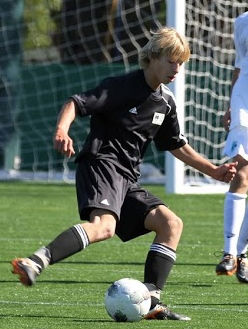 “I decided to commit to Delaware, because the academics there are very competitive, especially in the area that I am looking to study in,” he told TopDrawerSoccer.com. “Delaware also has good internship opportunities and a great study abroad program, which are both important to me.

“I also decided to commit to Delaware, because they have a very strong soccer program. Out of the past three years, Delaware has been in the NCAA Tournament two times, and they are looking to grow on that. I also like the style of soccer that Delaware plays. They like to keep the ball on the ground and play, they aren’t a team that will just play kick and run.”

A versatile attacking player who can slot in up front or as a center midfield, Gillin likes to try and control the tempo and speed of the game. The coaching staff was another impressive aspect of the program.

“Coach [Ian] Hennessy and coach [Jon] Scheer are very knowledgeable about the game, and they made me feel at home,” Gillin said. “What I like about Coach Hennessy is that he is very honest with you. If you are not playing well he will tell you, and vice-versa. If you deserve to play, you will play. No matter what grade you are in. I also like that Coach Hennessy puts a big emphasis on academics. He knows that everyone can’t go pro, and how important getting a degree is.”

Gillin is the first reported committed to Delaware for 2015.

Matthew Glick, of Harvard-Westlake School in Los Angeles, and captain of Santa Monica United Blue B96, a nationally ranked club team and defending Coast Soccer League Premier and So Cal NPL champions, has committed to Colgate University for 2015.

Glick, a left back, is also captain of his high school team and was First-Team All-League in 2013/14. He found what he was looking for all the way across the country.

"I am excited to go to Colgate and play with and against some of the best players in the country,” Glick told TopDrawerSoccer.com. “Colgate has the perfect mix of academics and D-1 soccer."

Glick is the third verbal commitment to Colgate’s 2015 recruiting class.