Like many other players before him, Francis Atuahene came to the United States via the Right to Dream program – a pipeline to provide Africans with educational opportunities across the Atlantic. 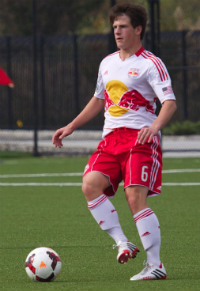 Currently a standout for the Hotchkiss School, a boarding school in Lakeville, Conn., Atuahene is on the cusp of Division I soccer after committing to Michigan for the fall of 2015.

An attacker with blazing speed, the Wolverines had the whole package of school and soccer available for the recruit.

“I decided to commit to Michigan because it is a top program athletically and academically,” Atuahene told TopDrawerSoccer.com. “Their soccer program is one on the rise, and it has a great future, bringing in one of the top classes this year. I really wanted to join a program like this with such a promising future so that I can be a part of something new. The coaching staff is one of the best and they are now bringing in some of the top players.”

Away from soccer, Atuahene was impressed by what he saw around campus and in the classroom.

“Michigan's facilities are world class and it is one of the best academic universities in the world,” he said. “I look forward to being part of not only a great soccer program but also a world-renowned academic institution.”

Sometimes, attending a college soccer summer camp can be the ultimate decider for getting a shot.

“I attended a summer camp at St. Louis University last summer and really liked the campus and the soccer coaching staff,” he told TopDrawerSoccer.com. “I was also very impressed with the aerospace engineering program at SLU, which is what I plan to major in.”

Cook, a hard-working midfielder who shines for both his Servite High School squad and Fram Soccer Club, liked the work ethic he saw in head coach Mike McGinty, and how it trickles down through the program.

“He is very intense and clearly wants to put together a strong program and encourages all of his players to work hard on and off the field,” Cook said. “The entire coaching staff instantly made me feel a part of the soccer family there.”

And at the end of the day, it wasn’t just about what the soccer program had to offer.

“I really wanted to attend a smaller Jesuit university and I really took to the campus the first time I went there,” he said. “I also like the fact that SLU is in totally different environment that what I am used to and I am looking forward to new experiences there. SLU also has an excellent reputation for its academic programs.”

A quality player who can slot in a number of positions on the field, Matt McCarthy’s decision to commit to Cornell came down to a conversation with head coach Jaro Zawislan.

“After visiting Cornell and talking with coach Zawislan I was certain this was where I wanted to be for the next four years,” McCarthy told TopDrawerSoccer.com. “It's a great school with great sports and a lot of spirit.”

Finding a coaching staff that he identified with was important for McCarthy after his experience at the club level.

“Coming from the Red Bulls where the coaching is really great, I wanted to find coaches who were passionate and would continue to help me grow,” he said. “I also like that the field is right on campus. Last, I liked coach Zawislan's commitment to his players and winning.”

Last but not least, McCarthy obviously took to the idea of an Ivy League education.

“Cornell is a phenomenal school,” he said. “I wanted a great education and a large school experience. Also it's close enough for my parents to come watch my games.”

Midfielder Peter Martin (PDA) committed to University of Rochester for the class of 2014.

Goalkeeper Jack Curtis (Eclipse – Texas) committed to Texas-Tyler for the class of 2014.

Goalkeeper Charlie Sockol (Pennine United) committed to Duquesne for the class of 2014.