In this week’s commitment update, a U.S. U18 Men’s National Team forward talks about joining the ACC, a striker from South Carolina stays local, a forward in Florida is Big Ten crazy, and a defender from the Midwest is off to an Ivy League program. 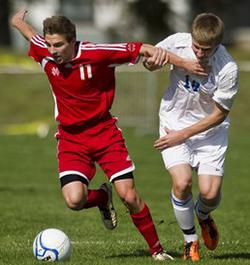 There are a plethora of reasons Travis Wannemuehler decided to head to North Carolina State.

The lure of an up-and-coming program and getting a chance to cut his teeth playing in one of college soccer’s highest levels was incredibly enticing.

“I couldn't be happier to be playing in the best soccer conference in the country, and I am very excited to try and help the program break into the top part of the ACC,” he wrote TopDrawerSoccer.com in an email.

A forward with an array of attacking abilities, Wannemuehler has been in and out of U.S. youth player pools while playing in Indiana, and he was a part of the last U.S. U18 camp that took place earlier in 2012.

There was a connection with the Wolfpack coaching staff as well that made it an easy choice.

“I think the great relationship the coaches and myself developed helped a lot in my decision,” he said. “Both Coach [Kelly] Findley and Coach [David] Costa are great guys who know a tremendous amount about soccer.”

Findley and Costa had coached at Indiana United Academy while both were part of the Butler staff in Indianapolis. They moved to NC State prior to the 2012 season.

A good deal of time has passed since Eli Dent made his verbal commitment to South Carolina.

With other schools like Wake Forest and Furman showing strong interest, Dent made his decision to stick with the Gamecocks at the end of last year.

“I chose USC for many reasons,” he wrote TopDrawerSoccer.com in an email. “South Carolina is a strong program that's not afraid of a challenge. I wanted to go to a school that would challenge me as a player and with the third toughest schedule in the country this year, I knew South Carolina would do that.”

None of his final choices would have taken too far away from his family, but he’s eager nonetheless about the possibility of them coming out to support him when he begins his playing career there.

“I am excited to stay relatively close to home because my family will be able to come to all my home games,” he said. “I thoroughly enjoy the fact that for the moment I can visit USC to see games and events whenever they come up.”

When he does begin his career there in the fall of 2013, joining him will be a pair of South Carolina United teammates, Koty Millard and Hamilton Carlin, helping Dent to make a smooth transition.

For Danny Jensen, his family’s affinity to the Big 10 helped guide him in his college commitment.

“My family is crazy about the Big 10 . . . and so am I,” Jensen told TopDrawerSoccer.com. “I have had a dream for many years to be able to play on the field as a Buckeye and my dream became possible. I had to take advantage of it.”

Jensen has recently emerged on the national stage as a potent goal-scoring threat. The forward has 16 goals in 18 games this season for Weston FC in the U.S. Soccer Federation Development Academy, but in the previous two seasons in the DA, he was shutout while playing defense.

“I really never received an opportunity to play forward at the academy level in the past two years for Rush,” Jensen said. “I was a forward until about age 13 when I was switched to centerback, where I was needed.”

With the move to Florida last year, there was also a new club for Jensen and another chance to move up top.

“When I arrived in Weston, I wanted to play forward,” Jensen added. “My coach believed in me and that's all the confidence I needed to get back to my old self.”

The striker had a couple other schools also vying for his commitment.

“Indiana and Stony Brook were very much in the conversation,” Jensen said. “All three schools had a coaching staff that I knew I would be able to play for, but in the end it was Ohio State.”

Jensen is the first verbal commit for the 2013 class for the Buckeyes.

Jason Pesek, who was recently profiled in our recruiting insider series, made his verbal commitment this week.

“I chose Brown University not only for the outstanding academics, but also for the their strong soccer program,” Pesek told TopDrawerSoccer.com over email. “Not only did the professors and administrators make me feel welcome; but the coaching staff and team really emphasized teamwork, and I could see it the moment I met with them.”

Pesek is a starting defender for the St. Louis Scott Gallagher Missouri U16 squad, which currently has the top statistical defense in the Development Academy at 0.38 goals conceded per game.

The high school junior is excited to join a strong program like the Bears, but he knows the academic challenges of an Ivy League institution can be daunting.

“I know it will be a tremendous challenge for me at an Ivy League school,” Pesek said. “But I’ll continue to work hard and prepare my best to accept the challenge.”

Pesek is the first verbal commit of the 2013 class for Brown.