Boys Commitments: Midfielders on the move 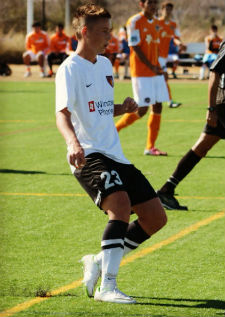 A technical and creative midfielder, a strong relationship with the Furman coaching staff helped convince Keegan Woolley that Furman was the right move for him to make.

“I committed to Furman because I liked the coaching staff and have heard great things about coach [Doug] Allison plus I've known coach Anthony [Esquivel] for a long time,” Woolley told TopDrawerSoccer.com. “The players are very good and made me feel very welcome.”

The soccer program’s most famous alumnus certainly played a part too, as Woolley is following the same trail that a certain U.S. Men’s National Team star was blazed.

“I loved their training facility, stadium and also the conference they play in. the climate there is perfect to play in and it's where another Texan played Clint Dempsey, I'd like to follow in his footsteps,” Woolley said.

An under the radar, box-to-box midfielder for Real Colorado, Hunter Howard likes spotting a pass, keeping possession and moving the ball quickly.

He also like the opportunity playing at Davidson offered him, recently committing to the Atlantic 10-bound program.

“I decided to commit to Davidson because I knew the academics were one of the best in the nation and the soccer team is a competitive D1 school moving to the A10.”

Howard obviously liked that the program was heading to the Atlantic 10, where it will face other rising soccer teams like VCU, Dayton and George Mason.

The team chemistry also appealed to him, as he sensed the camaraderie during a visit. Off the field, there was plenty that swayed him as well.

“I like how the school campus is small and that there aren't many students so everyone gets to know each other and it's easy to get to class,” he said. “I also like how challenging the classes will be.”

Midfielder Brett Glasco (Philadelphia Union) committed to West Chester for the class of 2014.

Midfielder Josh Keller (Tennessee SC) committed to Montevallo for the class of 2014.

Goalkeeper Joseph Melong (Shattuck St. Mary’s) committed to Temple for the class of 2014.

Defender Kyle McLagan (Futura FC (Mo)) committed to Furman for the class of 2014.

Forward Alex Vigliotti (Oakwood SC) committed to Providence for the class of 2015.