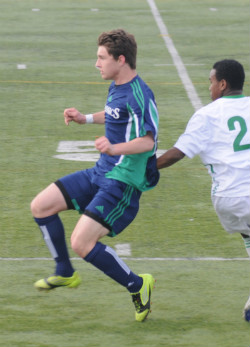 “The combination of their highly-ranked academic program in Business, their very strong Division I men's soccer history, and their beautiful campus and athletic facilities drove my decision,” Mahoney told TopDrawerSoccer.com.

An aggressive attacking player who relishes taking on players one vs. one, Mahoney also saw a lot of parallels between his club team and JMU’s program under head coach Tom Martin.

“Playing for Steve Klein on the PA Classics, I’ve gotten to appreciate how important it is to develop a full team, not just have a couple of star players,” Mahoney said. “I think JMU’s Coach Martin has been successful for some of the same reasons. The Dukes have really solid players with great team chemistry whose results have been very consistent over the years.”

Mahoney also really liked the kind of support he could get both on and off the field at JMU.

“As I mentioned before, the academic program in Business is particularly strong there, and the campus and facilities are fantastic,” he said. “On top of that, the academic support that JMU provides for its athletes is really incredible. Unlike student-athletes who compete in spring sports and have the full fall semester to get used to things, freshmen soccer players hit their first semester running full-blast. With all of that on our plates at once, it’s really great to know that there are so many resources there to help us succeed both athletically and academically.”

Like many recruits, a visit to his future collegiate home helped seal the deal for Dennis Sparks during his college search. Meeting the players, watching a training session and a game were all vital in convincing him to make a commitment.

“After talking with Coach [John] Bluem and Coach [Frank] Speth, I realized that their vision for the program matched what I was looking for,” Sparks told TopDrawerSoccer.com. “And I could see this in how the team played. The fact that I could see myself fitting in stylistically with the team was also very important to me. The team's training also stuck out in my head. I could immediately tell that Coach Speth was an excellent trainer and had very positive interactions with the players.”

Along with the opportunity to see the soccer team up close, he found lots to look forward to about the campus.

“The school itself was also very impressive to me,” Sparks said. “I sat down with a representative from the department of my intended major, and we mapped out what courses I would need to take over my four years. Ohio State is ranked as one of the top Public Schools in the nation, and even higher for my intended major. The coaching staff and the history of excellence in athletics and academics are what really drew me to Ohio State as a place where I know I would grow individually.”

Forward Jacob Scheper (Cincinnati United Premier) committed to DePaul for the class of 2015.

Midfielder Daniel Rutter (Houston Dynamo) committed to Coastal Carolina for the class of 2014.

Defender James Myall (Chicago Fire) committed to Brown for the class of 2014.

Forward Coy Craft (FC Dallas) committed to North Carolina for the class of 2015.