Some midfielders like to dart forward and join the attack from the middle of the park, but the Colgate-bound Vallee stays at home a bit more often. 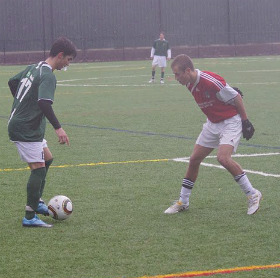 The defensive-minded midfielder decided that the program had the right blend of soccer and school.

“I decided to commit to Colgate because it was an outstanding opportunity to play the sport I love at the Division 1 level at a great academic institution,” Vallee told TopDrawerSoccer.com. “During my recruiting visits I got great vibes from the team and coaches, who couldn't have been any more helpful throughout the recruiting process. The players on the team had nothing but good things to say about the program and they truly enjoyed what they were doing, creating a strong team chemistry that I wanted to be a part of.”

The soccer team also had the right kind of ambition, as despite its smaller size, the team has enjoyed Patriot League success of late and is looking to do more each and every year.

“The coaches are always pushing the team to do more than expected, which has made them a very successful program in the past,” Vallee said. “Also, I felt like my game was a lot more compatible with their playing style in comparison to other schools I had looked at. Lastly, the strength of Colgate's schedule showed their lack of fear for playing the best teams in the country, a confidence that is echoed in every exercise that the team does. This overall attitude solidified that Colgate's program was the place I wanted to play at.”

A hard-working right back who likes to get forward and join the attack, Albertson SC defender Daniel Bank found everything he needed at Bucknell, a small school in central Pennsylvania.

“I decided to commit to Bucknell because it had a perfect balance of academics and soccer. Bucknell is a great school and has a soccer program that is known to succeed. I know Coach [Brendan] Nash knows how to succeed, and I am looking forward to being apart of it.”

It’s no secret how big of a role a coaching staff plays in the recruitment of a player, and in Bank’s case it helped seal the deal.

“I got a great feeling when I met with the coaches,” he said. “Coach Nash and Coach [Pat] Long are very dedicated to the program and have very high expectations for the soccer program every year. I liked the fact that Bucknell has been a dominant force in the Patriot League, and I am excited to contribute and achieve great things with Bucknell. The soccer facility is also state of the art, which is definitely a plus.”

Few programs made quite the splash like Cornell did last season, but that wasn’t the main reason Hollis Malkowski chose the upstate New York program.

“I committed to Cornell because I love the school and the education provided is second to none,” he told TopDrawerSoccer.com.

Although last year’s success certainly helped, and the prospect of joining a soccer program on the rise were also traits that Malkowski liked, he also cited the school’s more rural setting as a factor, along with the academic opportunities provided.

“I liked the school because it had the educational program that I was looking for, one that many other schools don't,” he said. “Especially since I can go straight into my major instead of having to take other requirement courses that other colleges have you take. I also liked Ithaca because it isn't a large city and is away from all the big cities. I liked how it is tucked away in the mountains of upstate New York.”

Defender Jordan Cano (FC Dallas Academy) committed to SMU for the class of 2014.

Midfielder David Itoafa (Mass Premier Soccer) changed his commitment to Siena College for the class of 2013.

Midfielder Andrew Chalker (Castro Valley) committed to Dominican University for the class of 2013.

Nicholas Le (Crew Soccer Academy Wolves) committed to Colgate for the class of 2013.