The second current top scorer on the Seattle U16 Development Academy side, Ryan Schaefer is a quick forward who looks to get in behind often. 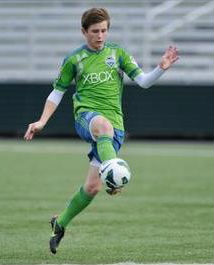 There was plenty that pulled him to leave the Pacific Northwest in favor of Denver.

“I decided to commit to Denver because of the coaches' and players' ambition and professionalism,” Schaefer told TopDrawerSoccer.com. “There is a belief that the program can do big things in the future. It's something I wanted to be a part of, and I believe they are going about it the right way.”

Schaefer liked the team’s attractive style of play, as he thinks it fits to his strengths and can help set him up to succeed at the Division I level.

He also liked the city, which reminded him of home.

“Denver is great because it's located where it's culturally similar to my hometown of Seattle, which is nice,” Schaefer said. “When I visited, I found all of the players and students to be friendly and welcoming.”

Schaefer’s current teammate on Seattle’s U16s will follow him to Denver.

A strong center back with 22 starts to the current Dev. Academy campaign, the coaching staff was one of many things that drew Tosh Samkange to follow in the footsteps of his teammate.

He also liked the academics and the support for student athletes, but it was the way the team played that made an impression on him.

“I am a big supporter of their style of play, which suits me,” Samkange said. “The coaching staff has a clear vision of how they want to play.”

Samkange could also sense that the coaching staff would help him to play to his potential.

“I feel like the drive of the players and coaches [Bobby] Muuss, [Jamie] Franks, and [Ryan] Hopkins, will allow me to achieve success and develop as a player,” he said.

Midfielder Blake Barribeau (Michigan Jaguars FC) committed to Oakland for the class of 2015.

Midfielder Tristan Rehrig (Orlando City) committed to West Florida for the class of 2014.

Defender Josh Constant (San Diego Surf) committed to Westmont for the class of 2014.

Forward Yazi Hernandez (Pateadores SC) committed to Westmont for the class of 2014.