In this week's recruiting insider, a former U.S. Residency Program talks about his suitors plus a couple of other talented players talk about their adventures during the recruiting process. 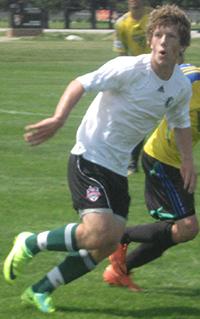 A member of the U.S. U17 Residency program last year, Ohio resident James Haupt is currently in the middle of identifying where he’ll take his game to the next level after he graduates in 2013.

“I am trying to evaluate the different schools that have shown an interest in me,” Haupt wrote TopDrawerSoccer.com in an email. “I have made visits or attended camps at several schools. I will be scheduling more visits and attending one or two camps this summer.”

The process of researching and making hasn’t made it that much easier, as he’s found a lot of promising things in different places.

“Overall, I have been impressed with the schools that I have visited,” he said. “Each has their own strengths both with their academics and soccer programs. All of the coaches have treated me well. It has been a hard process to narrow down the schools.”

There are plenty of things that Haupt is looking for – good academics, the right program, proper facilities – and of course, he’s also hoping to compete at a strong soccer program.

And though he wouldn’t mind staying close to his Ohio home, it’s not going to be a huge part of his decision.

“I would prefer the Midwest since it is closer to family and friends however this is not a major factor in my decision making,” he said. “It would be hard to pass up an opportunity to play for a top 25 soccer program.”

Sometimes as a player outside the Development Academy, it can be hard to catch the eye of a Division I program.

That’s the challenge that Anderson deAndrade is trying to overcome, as a goalkeeper on the Crew’s Pre-Academy U18 team – although he spent the Spring 2011 semester playing Dev. Academy soccer for IMG Academy’s U16 squad.

And while he’s hoping to find his way onto a DI team, most of his interest has come from Division III programs.

“I have visited University of Chicago, and really enjoyed both the campus and the city,” he wrote TopDrawerSoccer.com in an email. “I really liked the feel of the campus, and am very impressed by the mixture of athletics and education.

“I also have interviews scheduled at Ohio Wesleyan University, the DIII national champions, and with Coach [Chris] Brown at Kenyon. I have practiced at OWU and attended camp there last summer and my correspondence with Coach Jay Martin has me really excited to get a tour there this coming week.”

Having also exchanged emails with the coaches at several other programs, including Georgetown and Cornell, deAndrade is hard at work trying to get his name out there and to try and find the right mix of academics and a strong soccer program.

“I hope to major in either Education or Environmental Sciences, so I am always interested in any college that contacts me that has one of these majors,” he said. “Right now I am willing to travel anywhere for school, I just really want to continue my pursuit of soccer at an academically strong and respected school.”

Edson Cardona has been one of the most consistent pieces for De Anza Force U18 this season. The high school junior has contributed five goals in his 15 starts for the top team in the Northwest Division.

The Northern California-native has attracted interest from schools across the county, but the local school is at the top of his list right now.

“My top school, at this very moment, is Santa Clara because it is close to home, the coaching staff is very good, strong academics, and the team has great chemistry.”