The game of the day again came from Steve Hoffman’s ’97 Cal South boys. After a scoreless first half, things looked bleak for the California side when a handball in the box prompted a penalty kick to Florida and a red card to Christoper Rodriguez that sent Hoffman’s side down to ten men. Tobin Howell’s PK found the back of the net and California had plenty of work to do. 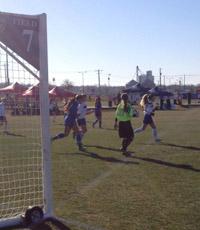 The goal only seemed to spur on the So Cal side who came back from a 2-0 deficit against Virginia on Friday night and with the last kick of regulation, Eddie Cabrera scored a wonderful individual effort to send things to extra time. With less than ten minutes to play and penalties looming, Alexis Diaz scored from a corner kick to earn Cal South a thrilling and seemingly improbable championship.

“It’s been a week of that,” Hoffman told TopDrawerSoccer.com after the win. “We played the national team, went down by three and came back to win 5-4 and we always thought we would come back. We’ve got character and a never say die attitude. They worked their butts off and I don’t think there was a loser in this match.”

In the ’97 boys consolation match, Blake Barribeau was the hero scoring a first half goal that held up to give coach Matt Johnson’s side third place.

On the ’97 girls side, Cal South were the champions as Katie Pingel scored her third goal of the weekend to give her team a 1-0 championship game win over Eastern NY. Pingel’s team finished the tournament without a goal allowed on a stout defense led by Denae Verdine, Danika Bowman and Leah Pruitt.

The consolation game went to Michigan who rebounded from a Friday night thumping to beat North Texas 3-2 on first half goals from Brenna Lovera, Hannah Jones and Brittany Tanner.

Amazingly, the ’96 age group games went almost identically as the ‘97s. In the ’97 boys final, Cal South again came from behind to beat Eastern Pennsylania. Just two minutes into the match, Wyatt Fabian scored to give PA an early led. Just before halftime, Michael Licon, one of the players of the tournament, scored an absolute screamer from 25 yards out that knuckled past goalkeeper Shaun Quinn to tie the game. Miguel Acevedo scored the winner in the 65th minute to complete the trio of Cal South championships

The ’96 Cal South girls, perhaps the most organized and tactically sound team of the whole weekend in any age group, had a little trouble seeing off a plucky Indiana side, but eventually cruised to victory. Hailey Harbison scored her third goal of the weekend in the fourth minute to give Cal South an early lead while the fantastic center back combination of Annia Mejia and Chloe Hemingway snuffed out every Indiana chance. Cal broke the game open late on a spectacular strike from Pilar Torres and Christina Settles scored just before full time to put icing on the quadruple-trophy cake.

Coach Hoffman said it best: “We’re having a very good day at the office.”