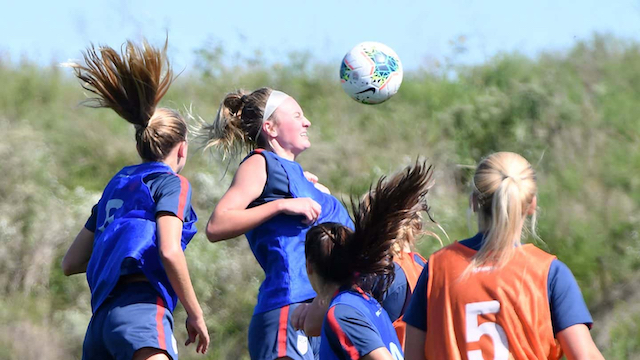 Is the U.S. Youth National Team back in action?

The recent letters being sent out to players and clubs would lead you to believe the U.S. Youth National Teams are making a comeback sometime soon in 2021.

The first camp that seems to be in the pipeline is the U17 Women’s National Team, the 2005 age group, as the Federation aims to get a better idea on that age group with the anticipation that youth events might look closer to normal next year. Early indications suggest this is a virtual camp as an introduction for the player pool.

The Girls Academy social media account has been announcing some of the players from the league who have been called up to the team this week on Twitter. Peyton Nourse (Colorado Rush), Bella Garces (NEFC), Cameron Patton (Lonestar SC), Nicollette Kiorpes (NEFC), and Megan Santa Cruz (LA Surf) are the first players the league has announced as part of the player pool. Sydney Watts, a star for Sporting Blue Valley, is also part of this camp. STA, another Girls Academy club, also announced that goalkeeper Kyla Holmes has been called up. Jenni Groves, Ashley Pennie, and Abriella Moss are also part of the camp.

The Girls Academy League kicks off their first event of the season next week in Texas. The league has advertised that there will be a U.S. Youth National Team scouting presence at the event.

The Academy League is not the only show in town. ECNL clubs are getting the information packets as well for players getting called into the national team player pool. North Carolina Courage Academy announced six players called into the pool on Wednesday. Lauren Martinho, Kiera Clemens, Abby Gundry, Aleigha Arndt, Mia Oliaro, and Phoebe Goldthwaite are the six players included in the pool. Cameron Silva (Mustang SC) is part of the camp as well.

Unsurprisingly, Treasure Byars (Solar SC) is also part of this camp, as she factors to be a key player for this age group moving forward. The midfielder announced her inclusion on social media this week. Blake Olivier (AHFC) also announced on social media that she was called into the camp.

TopDrawerSoccer has also been informed Ella Johnson, one of the TDS Standouts from the most recent ECNL National Event in Florida, was also selected for the pool. Johnson is one of the stars of the Wilmington Hammerheads club. Tanner Ijams, a goalkeeper from Beach FC, and Katie Piburn, another member of Beach FC, are also part of the camp. Jamie Campbell and Savannah King, both players from Real So Cal, were also invited to the virtual camp.

Springside Chestnut Hill (SCH) Academy standout Lisa McIntyre has also been invited to the camp, her school's athletic department announced on social media on Wednesday. McIntyre played for SJEB Rush in the Development Academy last season. She previously played for Philadelphia SC. She is currently an FC Bucks player. North Harford High School announced that sophomore Finley Lavin, who plays for Pipeline SC at the club level, is also part of the camp. Hannah Jibril, another player for Pipeline, was also included in the camp.

Shae Harvey and Malia McMahon from LAFC Slammers were also called into this camp for the U17 WNT.

Kennedy Clark, Lily Danner, Amanda Schlueter, and Abby Unkraut were called in from the Cincinnati United (CUP) 05 GA team to the camp.

The virtual camp is scheduled for Friday, Feb. 5.